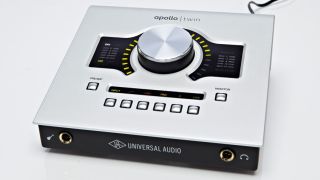 Wring every last drop of functionality from your sound system.

It's tempting simply to plug your audio interface into your computer, make the relevant input and output connections and then just leave it to do its thing.

There can be more to these anonymous-looking boxes than meets the eye, though, as you're about to discover.

For a complete guide to audio interfaces, check out Computer Music 207, which is on sale now.

Believe it or not, although they're primarily designed to work whilst connected to a computer, a number of audio interfaces can also operate in standalone mode. If you're interested in this feature, then interfaces from major players such as M-Audio, MOTU, RME and Focusrite are all worth checking out. Naturally, features do vary from one unit to the next; however, interfaces typically either retain their most recent settings when they're powered down, or allow you to save a specific 'standalone' patch to their internal memory. The latter should load automatically if the interface is powered up when not connected to your computer.

Stuck for ideas on what to actually do with your interface's newfound standalone capabilities? First up, interfaces that include integrated software can be configured to flexibly route inputs to outputs, so at the simplest level, you can use your interface as a mixer. This could be to subgroup signals or - if it has headphone outputs - to create headphone mixes. If you regularly practice with a band using the same setup, once you've dialled in the mix once using the mixer software, you can just bring the interface without the computer next time around. You may also be able to route analogue to digital and vice versa, which will turn your interface into a standalone AD or DA converter. Finally, there may be the option to route one type of digital connection (optical, say) to another type (coax, perhaps).

Even the most high-spec audio interfaces tend to include no more than eight mic preamps, limiting things a bit if you're recording a band. However, they often supplement the audio connectivity with S/PDIF and ADAT connections. So, if you can grab an ADAT- or S/PDIF-equipped mic pre or converter with standalone mic pres, you can increase your available input streams.

One way to increase physical connectivity is to add another interface. Some manufacturers allow you to combine multiple interfaces - excellent if you have the budget. However, you may also be able to aggregate interfaces from unrelated manufacturers. In the picture above, we're using OS X's Audio MIDI setup to combine two interfaces into one aggregated one.

More and more audio interfaces are including some form of integrated DSP effects, either for processing signals as you record them, or to provide onboard monitoring effects such as reverb. Here, we're using the king of them all - Universal Audio's mighty Apollo - to add reverb and delay to our guitar signal, and we can opt to record either that or the dry signal.

Although integrated mixing software is now commonplace with interfaces, it isn't the only option for managing your ins and outs. For simplicity, flexibility and to keep things tactile, a small mixing desk can be the perfect sidekick. Use it for monitor control, headphones routing, and quickly routing in any hardware device.

If you work solely in-the-box but like real-world analogue processing, connect your interface outs to outboard gear and route the processed signals back into your inputs. Many DAWs include features to make it a cinch to integrate external effects into your projects; for instance, Logic has its I/O plugin, while Ableton Live has its External Audio Effect.

It's not unusual to find audio interfaces integrated with other devices such as keyboards and even guitar processors (Digidesign's Eleven or Line 6's Pod, for example). Sometimes this combination will be ideal, particularly if you're on the move and need to keep your system simple, or if you need it tailored to your particular needs.

The most obvious way to expand your interface is to invest in an external mic preamp or channel strip. External preamps include much better circuitry than your typical interface, and a channel strip includes other tone shaping options such as EQ and compression. A quality digital audio converter - aka DAC - is the icing on the cake. Decent channel strips can be had for reasonable money these days, so don't fee