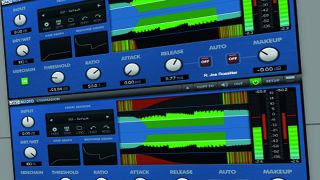 Make the most of your sidechain-equipped dynamics plugins with this baker's dozen of indispensible tips.

For more on sidechaining, grab Computer Music 219, which is on sale now.

Depending upon the genre of music you make, you may use varying amounts of sidechain compression and ducking on multiple channels. If so, spend a little time creating the perfect DAW template to suit your workflow: prepare at least one ghost trigger track ready to go and set up common groups and bus/auxiliary routings to help you hook up the pump quickly.

The popularity of sidechaining within most 4/4 styles of dance has spawned many automatic pumping plugins, such as Xfer's LFOTool and Cableguys' VolumeShaper 4. These don't compress a signal in the traditional way, but instead apply simple rhythmic volume shaping and ducking via curve shapes. If you haven't got one though, don't despair, as a simple tremolo tool will modulate volume (sync it to the beat and tweak it to fit), and you can also draw in volume automation curves to create precise pumping.

A combination of swamping reverb and excessive sidechain ducking can be used to create unearthly swelling sound effects that weave in and out of a track. Set up a really long reverb on a return, send key track elements to it, then pump the signal around the kick drum. Tailor the compressor's release time to taste, then render this signal to a new audio region and chop out the best sections to isolate immense openings and rising sweeps.

Daft Punk are pioneers of the pumping house effect as we know it. While we now usually apply sidechain compression to individual elements or busses, the Gallic disco robots achieved the effect by setting up a hardware compressor on the master output of their mixer, routing the kick drum to the key input, then timing the attack and release settings to let the kick's attack through while heavily compressing the track.

Create contrasting movement over the course of a track by automating a sidechain compressor's key parameters. For instance, you could bring the threshold down further throughout the second half of a track, causing more overt synth pumping and creating a change of pace. Consider lengthening release settings with automation to create a contrasting 'lazy' section, and tweaking the dry/wet mix to change the intensity.

Just as with any insert effect, the point at which you place your sidechain plugin in the signal path will greatly affect the outcome at the end of the chain. Many choose to place the ducking compressor at the end of the plugin order, which will obviously apply pumping to any previous reverb or delay inserts. Moving 'verbs and delays post-compression will cause them to catch and repeat the pumped signal, creating unique rhythmic effects. As ever, experiment by reordering your plugins and listen to the different outcomes.

Ever considered creating custom stereo effects with sidechaining? Apply separate sidechain compression to a signal's left and right channels to duck either side slightly differently, or duck opposing left and right signals out of the way of each other for fluid stereo movement.

Many plugins allow you to trigger them via MIDI offering a more performance-based alternative to an audio keying signal. Firing off dynamics processes with MIDI means you can play in the sidechain signal on your keyboard, program the response more accurately, and draw in fast gating patterns. You can even go nuclear and throw in some MIDI effects, if your DAW supports them.

Low-key sidechaining can be useful for adding gentle rhythmic interest among static mix elements. Try this for size: program a monotonous, 'machine gun' 16th-note hi-hat loop over a broken-beat kick and snare pattern, then gently interweave the hats around the core hits with sidechain compression to add subtle fluidity, removing the hats' robotic feel. You only need a touch for it to work.

Sidechain compression will often cut a sound off in the middle of its wave cycle, causing audible clicking at the edge of the ducking curve - especially noticeable when sidechaining bass and low-frequency elements. Often, it's a case of tweaking your compressor's attack and release values to get rid of the problem, but that may ruin the desired ducking response. Consider removing high clicking frequencies with a low-pass filter if your signal is a clean sub bass, or even render it to audio and replicate the sidechain effect with audio fades for maximum precision.

Following on from the previous point, the introduction of Ableton Live 9 saw a revamped Compressor device; and while its functionality was boosted, it seems to more prone to clicks than its predecessor. Luckily, it's still possible to load up the older model of Live's Compressor in your v9 projects. Simply use Live 9 to open up a Live 8 project containing a Compressor, then save this legacy device in an Audio Effect Rack in your library. Now, you'll be able to access the Rack in any v9 project, with the compressor right inside it. We find the FF1 mode provides the most click-free sidechaining.

Particularly in 4/4 music, a compressor's release time will have a huge influence on the rhythm and timing of the ducking it performs, so tailor it to the tempo of the track. There'll usually be a 'sweet spot' on the offbeat, but even a few milliseconds timing difference can have a huge impact on the groove; some tracks even pump closer to a beat's first or last 16th-note, giving more 'hectic' or 'lazy' feels. Try turning the gain reduction up further to help set the timing more accurately.

Finally, bear in mind that sidechain compression is a relatively modern effect, at least in its 'creative' mix applications. While many will proclaim that sidechaining is the 'essential solution' for combining mix elements for a professional-sounding result, plenty of classic mixes didn't make any use of sidechaining whatsoever. Instead, producers used to have to rely on the all-important skills - section arranging, frequency taming, and dynamics control - that are the bread and butter of mixing. It would be foolish to rely on sidechaining to fix mix problems and compensate for poor choices of sounds; instead, get your sound selection or design right at source, put them into a sonic space, and use sidechaining for your final touches to make an interesting mix that reacts to its own movement.