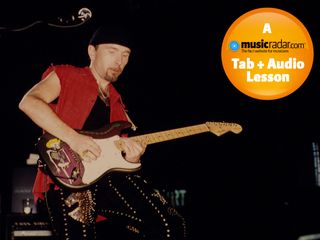 In the late 1970s when many other guitar players were trying to play faster and faster, The Edge cleverly realised that there was going to be a gap in the market for a style that moved in a totally different direction.

Drawing more from Television guitarist Tom Verlaine than Eddie Van Halen, he set about creating his own brand of guitar heroics which centred around arpeggiated chords and phrases using a delay pedal. He has humbly stated that this was more out of necessity than anything else due to the fact that with only bass and drums to play with, he needed to fill out the sound.

These days, of course, that sound regularly fills the biggest stadiums in the world. The Edge's style has continued to evolve reaching many creative and commercial high points through the 1980s, culminating with classic album The Joshua Tree in 1987.

The band set about tearing up their own rule book to boldly emerge in 1991 with a different twist on the U2 theme with Achtung Baby and the Zoo TV World Tour early in 1992 - one of the craziest and grandiose tours any band had attempted.

During the 1990s, The Edge concentrated more on coaxing strange sounds from his guitar, drawing from hip-hop and electronica rather than rock. It wasn't until 2000 and the album All That You Can't Leave Behind that he plugged his Gibson Explorer back into his delay pedal and AC30 and let rip with some of his trademark chiming riffs again.

The track in this lesson nods towards earlier U2 tracks with its open-string riffs and chord-based lead parts, although there are some moments of heavier distorted parts which is something that The Edge tends to favour these days.

We're in the key of D major (D E F# G A B C#) and the trickiest part is going to be keeping in time - if you lose the timing of the track it'll be further highlighted by the fact that the delayed notes will also be out of time! There's a delay pedal on throughout the whole track, set to Edge's favourite subdivision of dotted quavers. We've used a longer count-in than usual so you can set the delay speed correctly before playing. The lead part is very straightforward and draws largely from the notes found in the chords from the key.

[Bar 1 onwards] Watch out for the accented notes throughout the track. It's almost all eighth notes (quavers) but the louder notes give a triplet feel to the guitar parts. Pay attention to the palm muted sections as well. With the exception of bars 25-35 every note is played with a down stroke.

[Bar 37 onwards] The Edge often plays minimal lead lines that embellish the harmonies of the chords, so there's one continuous part on the recording. There are suspended 2nds and 4ths coming through in this section over the D and G chords and, again, pay attention to the accents when playing through it.