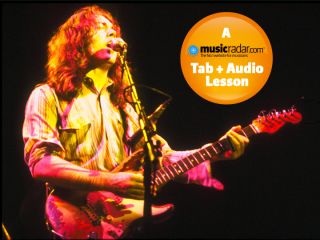 The four examples here are based on Rory's fiery rock solos, soulful blues, open G-tuned slide and hard-hitting, funky rhythm styles. A key to Rory's style is that he would 'push' the tempo with certain phrases so that the on-beat notes were timed either slightly before or after the beat of the drums - usually with a Fender Stratocaster.

We've 'squared up' the timing a little in the notation in places for ease of reading, but you'll be amazed how far you can lay back without sounding out of time. We've also added a little room reverb over the whole mix to give a more 'live' feel.

This example demonstrates Rory's fast and aggressive vibrato, pinched harmonics and quick-fire semiquavers, using mostly the E blues scale. We've used three positions of the blues scale in our example but you could improvise all across the neck with this scale.

This example is based around the G blues scale, and the slow tempo allows you to embellish your licks without sounding like you're trying to force too many notes in. Be sure to exaggerate the vibrato and the occasional staccato hits.

This solo is played with a slide in open G tuning (DGDGBD). Place the slide on either your third or your fourth finger and keep your first and second fingers rested against the strings behind the slide to help you mute out the idle strings.

This rhythm part demonstrates how Rory would freely move between chunky power chords, riffs and jazzier chords like the A9 or the E9. In places the guitar riff is in unison with the bass so focus on keeping your timing nice and tight!