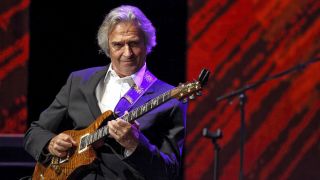 With a career reading like a history of modern jazz and various hybrid styles, John McLaughlin is not the easiest artist to summarise in a few short examples.

We've taken one particularly fertile period, from the end of the 60s up to the mid-70s, when he forged many musical ideas that would continue throughout his career.

McLaughlin recorded three solo albums between 1969 and 1971: Extrapolation, Devotion and My Goal's Beyond. They're diverse, demonstrating different elements of his creative processes in the transition from Miles Davis sideman to Mahavishnu leader.

The second of these had a harder edge, giving an early hint of what was to come with the Mahavishnu Orchestra. The ferocious Mahavishnu fusion sound also involved some ideas for fusing Indian rhythms and scales with Western music.

This was key to McLaughlin's next move. Returning to the acoustic sound of My Goal's Beyond, he joined forces with virtuoso Indian musicians in the group Shakti. In the space of six years, he'd worked on some of Miles Davis's most influential albums, recorded three solo albums and fronted two very different groups… not a bad result!

'Extrapolation' is possibly the most obviously 'late 60s jazz' of John's early solo albums, with some lovely modal improvisations.

This example is broadly in E minor, but the descending phrase (in quintuplets for a picking workout!) uses B minor pentatonic (B D E F# A). The lack of G or G# gives an ambiguous sound, neither E major nor E minor.

The Mahavishnu Orchestra were at the cutting edge of jazz-rock fusion in the early 1970s, but this was no slick, soulless fuzak - the band could rock.

With his 100-watt Marshall Plexi set to meltdown level, John wasn't afraid to play hard and messy, if it created the right vibe. Dig in!

McLaughlin was exploring Indian ideas from the late 1960s, but his acoustic group Shakti provided the chance for a proper East/West fusion.

Those three original 1970s Shakti albums are pure unbridled musical joy! This example uses a six-note scale (E F G# A B D) based on the southern Indian Raga Gaula… a bit like our Phrygian Dominant, but with the 6th (C) missing.