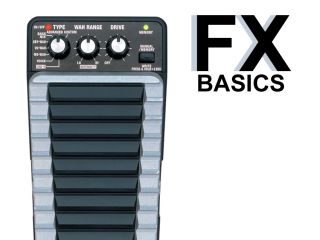 The controls available on modern wahs are often comprehensive, but common to all wah-wah pedals is the rocking treadle on top

Getting to grips with guitar effects can be a complicated business and there are so many different types that it can be difficult to know where to start. This Guitar FX basics series of video lessons is a brief introduction to the most common effects.

This video lesson focuses on wah-wah (often referred to simply as wah). Wah-wah mimics the ‘ahh´ vowel of the human voice by applying a filter (a process that allows only certain frequencies to pass through) to the signal. The range of frequencies this filter allows to pass can then be moved up and down by rocking the treadle pedal back and forth, giving a ‘wah-wah´-like sound.

Listen to the video below to hear how this sounds.