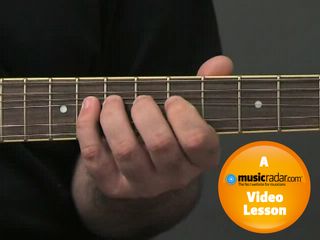 Pay special attention on getting the bent note in tune

In this beginners' video lesson, we show you how to string bend within the blues scale.

After the minor pentatonic scale, the blues scale is one of the most common scales found in guitar music. It's almost identical to its minor pentatonic cousin too, with just one additional note.

The extra note (called a 'flat 5th' for reasons too complex to explain here) creates a short sequence of three notes that are all one fret (called a 'semitone') apart. These notes are shown in Example 1 on the next page. This short run of semitones gives you a great chance to try out some bluesy bends.

In each case you should bend the string so that it sounds like you're playing one fret higher. This is tricky at first and needs a fair bit of control. If you're not sure how hard to push the string as you bend it, try playing the higher note first. This gives you a chance to hear how the note you're bending to should sound.

For each bend place your finger at the fret indicated by the small number. The 'virtual' fret you're bending up to is shown in brackets.