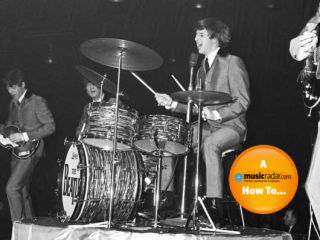 "Ringo Starr is one of the greatest drummers of all time," says Rich Pagano, drummer and co-vocalist for The Fab Faux, one of the world's premier Beatles tribute bands. "But like many of the greats, he made it look so easy. That's what happens with true originals and innovators, and as a result, people take for granted the artistry behind what they do."

It was in 1998 that Pagano, a seasoned sideman who has produced, recorded with or played drums live for artists such as Patti Smith, Rosanne Cash, Robbie Robertson, Ray Davies, Joan Osborne, Levon Helm and Ian Hunter, among others, formed The Fab Faux with Late Show With David Letterman bassist and session ace Will Lee, guitarist Jimmy Vivino (who now leads Conan O'Brien's TV house band) and session men Frank Agnello and Jack Petruzzelli.

"We started small, playing clubs for free or little money," says Pagano, "but we stuck to one rule: honor the music." Twelve years later, The Fab Faux are going strong, routinely playing 3,000 to 4,000-seat venues - not to mention a sold-out 10th anniversary show in 2008 at NYC's legendary Radio City Music Hall (capacity: 6,000).

"Our goal was always to take the music apart like mad scientists and re-create it live," says Pagano. "I mean, there's tons of Beatles tribute bands, and some are excellent, but we wanted to be the best around. And the only way to do that was by honoring the music 100 percent. To that end, I had to analyze Ringo and put what he did under a microscope. His early years [see the above video, performed on a vintage WFL kit, for examples] are fascinating because you're hearing a lot of pure drumming - fantastic grooves, swing parts and patterns that came from his years of playing in clubs in the late '50s and 'early '60s.

"From 1966 onward, The Beatles really accelerated the way music was recorded," says Pagano, "but as we all know, this coincides with when they stopped touring. They treated the studio as a second home, doing 45 takes of one song, changing ideas all the time. Through all of this, they pioneered the use of overdubs and how songs could be layered. This included the drums. Sometimes, what you hear on cuts like Something [shown in the second video, performed on a mid-'70s Ludwig Vistalite set, on the next page] are really two drum takes stacked on top of each other. So for The Fab Faux to play this in a show, I have to make choices on how to economize what Ringo did in the studio but still render it like a single live performance. It takes ears…and practice."

This also extends to the sound of the kit, as well. "Ringo's early drum sound was very live, ringy and splashy, but that all started to change after Sgt Pepper. Actually, Pepper was when the subtle shift occurred, and then everything changed dramatically."

To accurately reproduce the dry, damped tone of Ringo's drums from '68 onward (also illustrated in the second video), Pagano tapes tea towels, dishrags and sheets to his kit - just as Starr himself did. "You can really notice the sound on songs like Revolution, Come Together and so many of their later recordings," says Pagano. "They literally took tea towels from the kitchen of the studio and used them to muffle Ringo's kit. The sound is darker but very punchy, perfect for the material on 'The White Album' and Abbey Road - especially Abbey Road, where Ringo was using his rack toms a lot."

According to Pagano, studying Ringo Starr's style is essential for young drummers, not only for learning how to establish a song's groove ("listen to how he would lay back and play behind the beat sometimes; he never got in front of the song") but for mastering the art of accompanying a singer. "Ringo would react to the vocals with his fills," he says. "Just like a guitarist knows phrasing, when to throw in a little lick here and there, Ringo knew when to add his little parts. He never went overboard. Everything he did was tasteful, and for the most part, minimal. To put it succinctly, he didn't just play drums, he played songs."

Like Paul McCartney, Starr is left handed. "But he never changed his kit around to play the way a lefty would," Pagano notes. "He was a lefty playing like a righty, and he would lead fills with his left hand. This really made some of his fills sound very distinctive. He would introduce a fill where other drummers wouldn't, which can make learning his style a little frustrating. But once you get it, you're gold."

Despite Ringo's idiosyncratic style, Pagano is quick to emphasize that the ex-Beatle "could be an absolute rock 'n' roll beast behind the kit. The Beatles' Washington DC gig from 1964? He's the best musician up there! Anybody who thinks that Ringo Starr couldn't rock has to watch that DC show. He's like a race horse out of the gate. And he even sings and plays like you wouldn't believe on I Wanna Be Your Man."

When it comes to singing and playing drums simultaneously, Pagano knows from where he speaks. In The Fab Faux, he handles lead and background vocals on a good chunk of the repertoire. "I don't just sing Ringo's songs," he stresses. "We split the vocals pretty evenly in the band. Which is as it should be: there was no one singer in The Beatles; they were a great ensemble singing group."

Pagano brings the same sensibilities to his own band, Rich Pagano + The SugarCane Cups, a New York City outfit that released a vibrant and tuneful debut album last year. Pagano not only sings and plays drums on the CD, but he produced and mixed it at his own New Calcutta Studio (a full-length live recording is due soon). In addition, he teaches a course called One To One - The Art Of Singing And Playing The Drums As One, which dissects the styles of numerous drummers, including - you guessed it - Ringo Starr.