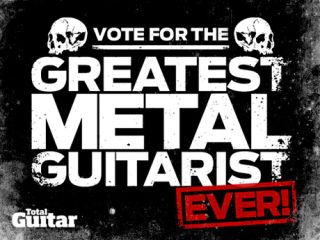 You have just under 24 hours left to vote in our greatest metal guitarist poll and it could still all change.

Currently, John Petrucci (Dream Theater) has a strong lead with 23 per cent of the vote, Mick Thomson (Slipknot) is chasing with 13 per cent and Mark Tremonti (Alter Bridge, Creed) is following close behind with nine per cent.

Children Of Bodom guitarist Alexi Laiho has also received a large number of votes, but as we stated last week, the technical trouble with the front-end results display has meant we won't know his full figures until we close the poll.

The poll will finish at midday tomorrow (Tuesday 22 February), but it's not too late to get involved. Spread the word on Twitter using the hash tag #MetalGuitarist and the short URL http://bit.ly/metalguitarist to direct voters to the nominations page.