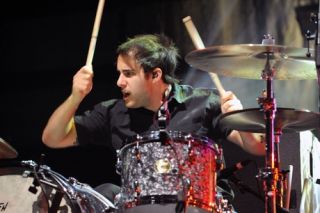 Former Paramore drummer Zac Farro has spoken out about his new project.

HalfNoise sees Farro step away from the kit and take on frontman duties, and he told altpress.com that the band's first show was a nerve-wrecking experience.

"We went to the first show, and I went to the stage for the first time I've sung in front of anybody ever," he said. "We were in Philadelphia and there are, like, 300 kids at this show, and I have to open my mouth and sing. I'm like, 'I'm either going to choke and nothing's going to come out, or I'll do fine.'"

"Those were the only two options I gave myself, and I did fine. So it was absolutely terrifying, but at the same time, I had this peace, and I was chilled about it."