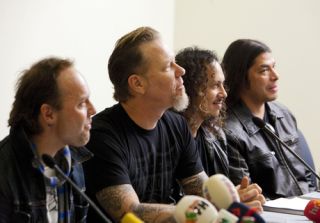 If you thought thrash's big four playing shows together was the shock of the decade, prepare to have your mind blown.

Lars Ulrich, Charlie Benante, Shawn Drover and Dave Lombardo all got up on stage together to jam through Diamond Head's 'Am I Evil' at Sonisphere Sofia. As if that wasn't enough, they were joined by every member of each of their bands!

But what, there's more. Lars even had time to share a hug with Megadeth mainman Dave Mustaine, making it a veritable thrash love in. Take a look at the video below for proof of the whole thing. It's unbelievably awesome, even if it does look like it was filmed on a phone in a cinema (it probably was). As you can see Lars took on main drumming responsibilities, which no surprise really as he's always had a soft spot for a bit of Diamond Head, hasn't he?

For more on the big four keep your eyes peeled for the August issue of Rhythm (on sale 6 July) for a very special cover feature.