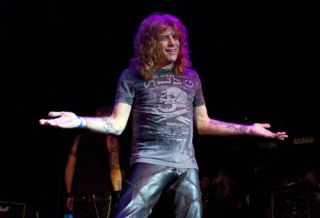 Steven Adler has revealed that he found out about the departure of Adler's Appetite singer Rick Stitch through Facebook. Ouch.

The former Guns N' Roses drummer, who told us last month that he hoped to begin working on an Adler's Appetite album in the coming weeks,spoke toMetal Sludge about the split.

He said: "I think he went about it the wrong way, 'cause I didn't even find out that he quit the band from him, I found out from someone else. I found out that he was quitting the band because somebody told me he saw it on his Facebook. I had no idea."

Adler also admitted the split with the horrendously named frontman puts a spanner in the works for the band's plans to hit the studio.

"…It's a shame that the singer we were working with decided not to work with us. Because we're going into the studio in the next three weeks, which he's gonna miss out on. And what he did to me personally I didn't appreciate. We were planning on him being in the band — that's why we did the recordings with him. So, basically, he wasted a lot of our time and a lot of our money."

Who's next for the revolving door line-up of Adler's Appetite then? What is it about Adler and unreliable singers?