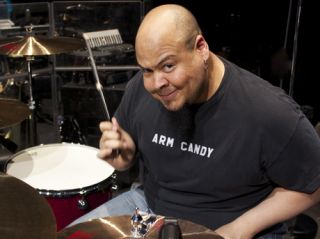 As part of our Session Month we put a host of questions to the drum powerhouse, with everything from first sessions to essential gear, via mint choc chip ice cream, on the agenda.

How and when did you land your first big studio gig?

"It's funny because it never starts with the big studio gig. It took years of hanging out at sessions, meeting people, doing lots of demos, then doing loads of midnight sessions, replacing those who over charge and under whelm. Then after all of that someone takes a chance and hires you to record a song in the daylight. A song becomes two, becomes an album and after years of this you are an overnight success!"

What was your first studio experience like and what lessons did you learn from it?

"I was lucky to grow up hanging at sessions with my father and I'd intensely observe Porcaro, Gadd, Colaiuta, Robinson, Acuña, Keltner, Mason and Vega. I'd study how they tuned their drums, the dialogue back and forth between musicians, the communication between them and the control booth. It always struck me that music could still be made amongst all of that chaos.

"The first time I was hired for an album project was exciting for me as I would finally get a chance to apply what I had observed. It was for a jazz record by Justo Almario. With my fishbowl experience I decided to take some of the chaos out of the equation. I had the drum doctor (Ross Garfield) bring drums and tune them so I knew there would be no question of the kit being recordable. I brought my own drum machine and set it up next to me so that I could generate click, program what I wanted to play against and start and stop it. I was usually the first one there and almost the last to leave as I wanted to make sure that I could punch in or overdub anything to improve the recording."

When you were starting out how many sessions were you doing on average per week?

"It snowballed from one a month to three a day."

How do you keep yourself organised when you have a lot of sessions back to back?

"A calendar is key, write it down and follow it. Also, communicate with all of the parties if there's any chance that there could be overlap. Some understand and some find it unacceptable but no one likes being surprised. "

What are the essential items of gear you take to any session, and do you have any gear secrets that you can reveal?

"As far as tricks are concerned, there are too many variables for any one trick to be consistent. The room is the biggest trick of all. The engineer is the next trick. I have done sessions where the room sounds awful, the drums aren't speaking. I tune high or low but can't make it do anything pleasing to me. Then I go in the control room and the genius engineer has made it sound incredible. The opposite and any number of variables in between have also happened. Again, the key is to dialogue with the engineer. Go in and listen, have the engineer come to the room and listen. Once everyone is communicating things go smoothly."

How much gear knowledge is needed for session players? In terms of being able to know the right gear and sound for particular tracks/artists and being able to get that sound quickly in the studio.

"It's more important to know your gear and its strengths and limitations. How high/low can you tune that snare? What does the bass drum sound like with less/no padding? Can the toms sound more live/dead? Once you know your gear, it is important to understand the mic choices and outboard gear choices but so much of that is personal taste. I would never dare to go into an ice cream shop with my wife and begin to tell her why mint chocolate chip is far superior to rocky road, so, tread lightly. Did I mention that communication is the key to all of this?"

How important is it to be able to play a wide variety of styles?

"That depends on your trajectory. I think it's important to appreciate and understand all styles of music. You never know what source inspiration might come from. When you listen to Beatles tracks you can tell that they pushed themselves into new territory by blending global sounds and approaches. Listen to 'And I Love Her' and 'Helter Skelter'. Same band, a variety of style."

How important is being able to read music for a pro studio drummer?

"To make pop/rock records it's not very important. To do film and television soundtracks it's crucial. Jazz/big band records you have to read. Some artists still hire arrangers who come in with the song mapped out but there's usually room to interpret. "

What percentage of the sessions you do are played to a click. Any tips for improving at click playing?

"80%. I prefer playing with a click because very often as you record take after take and you keep it fresh, there will be moments that you want to edit together. Keeping it all at the same tempo helps.  My biggest tip would be that quarter notes are often not enough. Too much guess work. So, I usually ask for eighth notes so that I can hear the upbeats."

How much interaction do you have with the artist in a studio situation?

"It varies. Sometimes artists are very hands on and there are some artists I have never met."

Have you been in situations in the studio of playing a beat that you don't believe is best suited to the track?

"Yes. Sometimes the demo drums were just the first loop that came on and sometimes it's something that they slaved over for days. Talk about it, make suggestions but sometimes you have to play their idea and figure out how to make it work."

Which have been your most memorable and most difficult sessions to date?

"Most memorable was recording live off the floor with Paul McCartney. effortless, joyful & a dream realized. Most difficult was a Shakira record. Communication was one sided."

How important is personality in this industry?

"It's 95% of the job. We don't make widgets we create memories and you have to give a part of yourself to the process. Artists who hire you are very vulnerable and you have to not only get along but also inspire confidence."

Honestly, how glamorous is the life of a session drummer?

"Incredibly glamorous. It's like a rap video! Except you're the guy operating the camera."

For more on session playing (including tips from Abe) pick up the latest issue of Rhythm and check out our online Session Month.