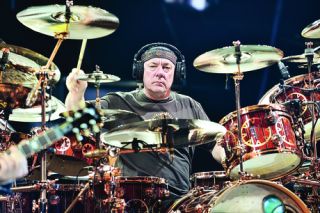 A DVD devoted to the great Neil Peart is coming, take a look below for full details on what you can expect.

Neil Peart: Taking Center Stage features over six hours of footage with the Rush drummer. You'll get to see Neil at rehearsals, soundcheck, live on stage and in interview.

The DVD sees the drum icon talk you through some of Rush's most chops-filled drum parts and you'll also get a nice up close look at his Time Machine kit. Unsurprisingly all of this wouldn't fit onto one disc, nope, the whole thing is packaged as a three-disc set.

As if that wasn't enough, Rush have announced that they will release a live DVD and Blu-ray from their 2011 Time Machine tour.

For more on that head to www.rush.com and to get further details on Taking Center Stage take a look at www.hudsonmusic.com. For a full tour of Neil's Time Machine kit check out our YouTube channel.