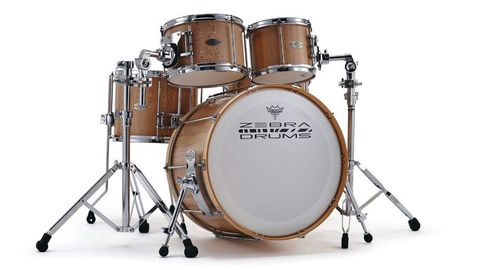 Drumazon of South Wales has a policy of bringing to the UK hand-made boutique drums from around the globe.

Zebra Drums are made in the Netherlands and we previously favourably reviewed a couple of snare drums. Now we have a full drum kit, and it’s a pretty radical beast, with finger-locked stave construction and an ingenious, thoughtfully engineered approach to maximising resonance.

Drum shells are free-floating and the tension of both batter and bottom heads is simultaneously achieved by simply tensioning the batter. The whole conception and creation are  the fruits of Sjoerd van den Beuken’s labours at his workshop in Roermond, south east Netherlands.

Sjoerd makes shells using a variety of timbers (from walnut to maple to oak), but for this kit he has chosen London plane trees. Yes, those mottled camouflage-trunked leviathans that line the avenues of our cities and municipal parks. Of mixed descent, the London plane is part American sycamore with a maple-like leaf. Odd then that it has not been used much in drum making (to our knowledge), Europeans opting mostly for birch or beech. Strange because it is rather special.

The way Sjoerd makes his shells, using quarter sawn lumber, intensifies the plane wood’s understated beauty. It enables Sjoerd to meticulously select and assemble stave shells with a vertically grained, stripy look, hence the Zebra allusion. Each vertical stave is roughly one inch across, so there are numerous staves in each drum.

Butt-joined staves are always in danger of ex/imploding. The likelihood of this with Zebra shells is massively reduced because the staves are ‘finger locked’: they have serrated edges that engage like geared teeth, which enables shells to be made thinner yet remain stable. Zebra’s shells vary in thickness from 6mm small toms (the thinnest and best looking staves I’ve ever seen) through to 12mm bass drums.

As for bearing edges, toms have a small round-over with a 45 degree counter cut, snare drums have a double 45 degree peak (although a round-over is also an option). The snare has deep flattened snare beds. The review kit shells are finished in Matte Oil, which is actually satin smooth. In the case of the plane shell the result is beguiling, which you really have to see in the flesh. Yes, it’s subtle - too subtle for rock’n’roll perhaps - but classy.

Thus our kit has the look of upmarket eco-design furniture in a glossy architecture magazine. As we say, not very rock’n’roll. But Sjoerd is aware of this and offers coloured stains and semi-gloss finishes, not to mention darker woods like mahogany.

On to the free-floating aspect. Zebra’s flawless shells are undrilled save for the badge and the tiniest of vent-holes. They are ‘free-floating’, which is made possible by Zebra’s unique tensioning and mounting hardware. We’ve seen free-floating drums before - Pearl’s Free Floating snares, of course, and most closely to Zebra perhaps, the Australian Sleishman drums. The idea is that the shell is not penetrated by mounting hardware or lugs - the only physical contact is via the heads and their hoops. To this end, Zebra makes its own solid brass tube lugs, which connect top and bottom hoops, but are not bolted to the shells. In the case of bass drums they are fixed to end-plates on the wooden bass hoops.

As for mounting, Sjoerd has developed his own Spring Action Suspension (SAS) system. Tom brackets are attached to the tube lugs, rather than to the shells, via steel plates. This is reminiscent of Pearl’s Opti-Mount (though grabbing the actual lugs not the tension bolts) and indeed Zebra uses a Pearl clamp to connect with the supporting cymbal stand. Zebra’s SAS is also spring loaded, which absorbs the impact of firm playing. Bass drum spurs are fixed to large steel plates rather than to the shell and these plates are emblazoned with a laser-cut Zebra Drums legend, making a strong visual statement.

Construction then is impeccable, but what of the sound? The floating nature of the tom and bass drum shells undoubtedly leads to an unhampered tone. But how does the free-floating system work? Well, the tube lugs are fixed into the bottom triple-flanged steel hoop and the resonant head just slips inside the cradle/cage and onto the hoop. The shell is then popped into the cradle where it sits on the resonant head. Then the top head and hoop slip onto that.

Tension bolts are inserted and as you tighten the top head the bottom head is tensioned simultaneously and equally. So far this is quick and not at all fiddly. But it now takes 30+ turns on each rod to get up to tension. And there is resistance to each turn from special Zebra-designed non slip Thread Locks - small black shoulder-ridged washers, which stop the tension rods from detuning while also preventing any metal-to-metal contact.

Eventually, you arrive at the tension you want. With top and bottom Coated Ambassadors the two heads are indeed nigh-on the same in pitch. The sound is so clean it leans towards the anodyne rather than the grunge scale. Whether this strikes you as lacking character or whether you revel in the purity is down to personal taste and musical setting. Personally, I’m inclined to think the experience of purity may arise because most drums are never tuned that accurately and evenly top and bottom, it being such a faff reaching the bottom rods.

Either way, the drums are fresh, responsive and punchy. With this system also, trying out different tunings - high to low - is relatively quick and painless. It therefore feels like the tuning range is increased and flexible.  Still, there will always be those who want the ability to tune top and bottom separately, in which case this is not the kit for you. But, we suspect, for most the advantage outweighs the downside. If more tonal diversity is sought, employing different weight/style heads top and bottom will add spice and sonic variety.

The free-floating fast-tuning system works wonders also on the bass drum. With intact front head - again simultaneously tuned - there is a mighty blast and ensuing rumble. You physically experience the large internal volume of the shell and yet, with the stave construction, the sound is still beautifully focused.

In short, the Zebra construction does what it says for the bass and toms. Unfortunately, we found that we couldn’t get the same satisfaction with the snare. This has conventional, separate top and bottom head tuning, an admission that most drummers will always want that flexibility with snares. But unlike with the other drums we found the terse, reedy, boxy sound unappetising. The same hollowness, which is attractive in the toms was a problem with the snare and no matter how we adjusted it we couldn’t get it to fatten up. It reminded me of reviewing an ultra-expensive Ludwig titanium snare with a similarly dry clonk, so maybe the problem is personal and others will love it?