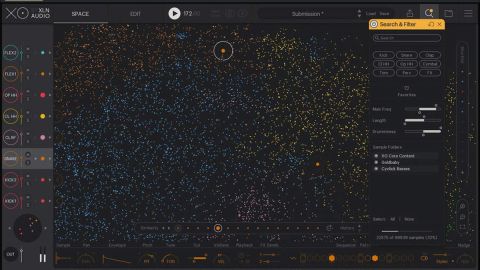 XO’s imaginative workflow and stellar sonics make the whole thing so good that you won’t mind its few shortcomings.

Having democratised the acoustic drum kit ROMpler with Addictive Drums 2, Swedish developer XLN Audio is looking to make their mark in the electronic percussion arena with their latest release, XO.

Its innovative, ambitious sample browser and inviting step sequencer certainly grab attention, but is there substance behind all that style?

To kick off with a very big number, XO (VST/AU/ AAX/Standalone) houses over 8000 richly varied and largely excellent one-shot drum and percussion samples. Adding your own (they don’t have to be drums, natch), however, is as simple as selecting as many folders on your hard drive as you like in the import dialogue, upon which their contents are scanned and fully integrated into XO’s library. This huge aggregated sample pool is navigated within the XO Space, a zoomable, scrollable ‘constellation’ interface, in which every sample is represented as a coloured dot by instrument type (red for kicks, blue for snares, etc), and similar sounds are spatially grouped via the magic of, er, t-Distributed Stochastic Neighbour Embedding.

Dragging the mouse pointer in the XO Space triggers and selects every sample it passes over, and the basic idea is to sweep quickly around until you find a sound you like, then zoom in and drag across other samples nearby to check out similar alternatives, or click directly in the 15-strong Similarity List below, where you can also ‘favourite’ samples for browser filtering. The field is narrowed using the Search & Filter popup, which facilitates filtering by name, type and folder, as well as slider-governed ranges for Frequency, Length and Drumminess, the last being a measure of general percussive sensibility, and is astounding in its intelligence.

Clearly, the accuracy of the import analysis algorithm in assigning instrument types to samples is crucial in all this, and we can report that XO is very impressive in this regard. There are anomalies, as you’d expect, but they’re surprisingly few and far between.

Once you’ve made your choice, drag the sample directly out of the GUI to your OS or DAW, or assign it into one of the eight circular sound ‘pads’ on the left to build up a kit. You can then hotswap samples via the XO Space and Similarity List, and use the Kit Visualisation panel to step through entire similar kits.

Selecting a sound reveals a strip of adjustable parameters at the bottom of the GUI. These mirror that sound’s channel in the multi-channel Edit view, which forms the other ‘half’ of XO...

The Edit view brings together collective editing and sequencing (though you can use XO as a static MIDI-triggered sound source) of the whole kit, with eight lanes replicating the per-sound controls in the Space view. These comprise pan, pitch, playback direction, transient and envelope shaping, LP/HP filtering, velocity sensitivity, sample start and end points, two effects sends, and output routing to the host DAW, as well as a 16-step sequencer. The sends feed into a pair of identical processors, offering 15 preset reverb and delay algorithms, with Length, Tone and Level controls; and there’s distortion (eight algorithms) and a filter on the master output. We’re surprised there’s no compression and EQ.

Together called the Playground, XO’s pop-out Beat and Sample Combiners let you non-destructively play with sound selection and sequencing.

The Beat Combiner sees a row of preset patterns loaded into each lane, each visualised as a segmented wheel. As well as the currently programmed pattern and an empty one, you get a choice of three instrument-defined Basic patterns and seven extracted from XO’s preset library. Click a pattern to initiate playback of it, the hand icon under a column to switch all lanes to that stack of patterns, or the Random button to set every lane to a random pattern from those on offer.

The Sample Combiner works along the same lines, but gives access to the Similarity Lists for all eight lanes, for swapping sounds. With the Similarity List able to be repopulated at a click, promoting the selected ‘similar’ to slot 1 with its own new set of 14 alternatives, this can easily take you miles from where you started. And activating Live Filter mode lets you replace the whole kit based on search results.

If you like what you hear in the Playground, hit the accept button to bake it into your actual patch; if not, click cancel to duck out of the Playground and get back to where you started, no questions asked.

The sequencer features A and B patterns with AB or AAAB cycling; velocity control; 14 per-channel and global groove presets with variable depth; up to a 16th-note of nudge backwards or forwards per channel; and rolls of up to four repeats. The Accentuator is a clever inclusion, enabling independently adjustable accenting or attenuation of notes falling on half-, quarter-, eight- and dotted eighth-notes for selected lanes. And needless to say, a sizable library of preset beats and kits is also onboard.

Finally, XO’s export options are comprehensive, with outward drag and drop of individual sounds or the whole kit, processed or raw, and the sequenced beat as audio and MIDI.

XO makes an immediate positive impression with the XO Space, and that impression only improves as you get to know it. As a librarian, it transforms the mundane process of exploring even the most oceanic collection of one-shots into a joyous voyage of discovery; but that sequencer is no mere afterthought, either, providing an effective platform for designing beats and drum sounds in its own right.

There are a few negatives, though. XO is dealing with a vast database, and that becomes apparent when searching and filtering, which often results in pauses of a few seconds, even when running off the insanely fast internal SSD of our 2018 MacBook Pro. Happily, though, the auditioning of samples in the XO Space is perfectly responsive, fast and fluid at all times.

The GUI is scalable up to 200%, but at its default size and below, the Search & Filter pop-up is intrusive. You can move it around within the UI, but it can’t be pulled out of it entirely. And finally, those eight sequencer lanes are resolutely fixed at 16 steps, which limits the compositional potential somewhat.

All that said, XO absolutely succeeds in its goal of serving up an endlessly adventurous, great sounding and fun-to-use drum machine with a truly unique and effective workflow.