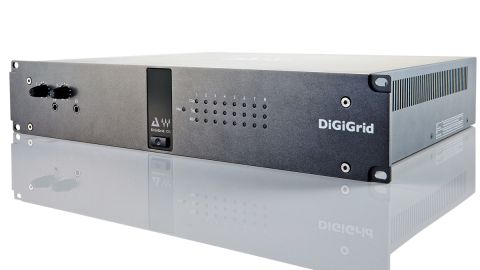 An impressively integrated hardware/software solution. Not cheap, but quality never is.

These are boxes which combine the physical connections of preamps and extended audio interfacing with effects processing software hosting.

Pro Tools systems arrived on the scene first but in recent years, their products have been doing battle with systems from Universal Audio (the Apollo range) and with DiGiGrid, from Waves.

Waves' DiGiGrid IOS - not to be confused with Apple's operating system for mobile devices - provides comprehensive hardware audio interfacing capabilities, while at the same time allowing you to run copious effects via its internal DSP, allowing for multiple, super-low latency instances.

The design of DiGiGrid is substance over style, with a functional 2U grey box offering twin headphone ports on its front left-hand side, a central power button and overview status LEDs of its eight analogue inputs, showing input signal, Clip level and 48V phantom power status for each channel.

As you might expect, this leaves the rear panel as the main hub for connections, where you'll find the eight combi XLR/line inputs and eight outputs (via 1/4-inch connectors and doubled, alternative 25-pin Con ports), as well as AES/EBU and S/PDIF digital connections and MIDI In and Out ports too.

All DiGiGrid products can be networked and the connection choice here is Ethernet. This allows for ultra high-speed interfacing, of course, but if you're an owner of a current Mac laptop or any other computer without a native Ethernet port, do bear in mind that you'll need to purchase a Thunderbolt/Ethernet adaptor too.

Once you've registered IOS, you're directed to a download link, which provides you with the software required to get DiGiGrid working. This is largely managed through two software applications which allow you to configure your system, with almost no need to touch the hardware.

The first of these is the DiGiGrid IOS Control Panel, which offers a Control tab in the bottom left-hand corner to let you set levels and settings for each of the eight preamps, as well as check output and headphone settings at a glance.

The more involved software package is SoundGrid Studio, which is where more complex signal routings can be configured, with a virtual mixing environment offered across DiGiGrid's hardware options. Here, effects can be added to multiple insert slots and further instances can be configured to auxiliaries and output channels.

Levels and pan positions are set here too, with an impressive level of flexibility, including the option either to monitor or print effects assignments at the tracking stage.

DiGiGrid IOS is an impressive system and we only have a couple of niggles with it. The first is the name; 'IOS' is either deliberately provocative or a little lazy - we can't fathom why Waves have used a name so redolently associated with other technology.

The second is the unit's operational fan noise, which is loud enough to preclude housing in either your recording or mixing room.

These concerns aside, DiGiGrid IOS has an awful lot going for it. The sheer range of Waves plug-ins which can be hosted here is hugely impressive and, while the hardware isn't beautiful, you can set it up, configure it over software and therefore forget about it, leaving you with a rock solid, great-sounding solution.

This is made possible as the software applications designed to manage it work so effectively. It's also a hugely expandable system, not only with further IOS devices but via other products in the DiGiGrid range. The IOX, for instance, can be chained over Ethernet to provide more high-quality analogue preamps.

UAD and Waves are doing battle on a number of levels, both in terms of the high quality plug-ins the pair are continuing to develop and now with significant advances in their hardware provision for pro audio systems. Long may the battle continue if it produces products as fully spec'd as UAD's Apollo and Waves' DiGiGrid IOS.