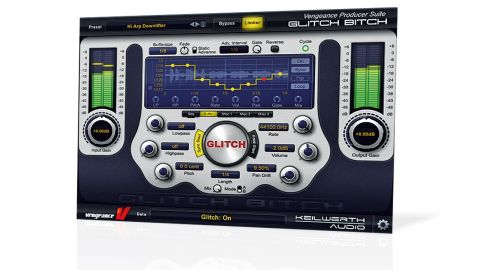 Not as feature-rich or powerful as some glitch plugins, but Glitch Bitch's workflow, envelopes and presets make it a winner.

Its core functionality involves repeating a chunk of the input signal - a 'buffer' - to create a stuttering effect, similar to a stuck CD but with the advantage of being syncable to the host DAW's tempo.

You can reverse the buffer for some disorientating effects, and the Buffersize parameter has its own modulation envelope, giving you a totally intuitive, visually representative way to change the length of each repeat over time.

Vengeance calls this (and the plugin's four other envelopes) an 'n-point' envelope, allowing you to add (and remove) as many nodes as you like, creating anything from quick glitches to repeating builds.

The plugin also sports resonant high-pass and low-pass filters for bold tonal shifts; a Pitch control for dropping the buffer down in cents and semitones by anything up to an octave; a sample rate divider that can heavily crunch up the audio; and panning and volume controls - all of which can be modulated by the aforementioned envelopes.

Despite its relative internal complexity, Glitch Bitch is extremely user-friendly. The presets - without which the whole plugin would be fairly unremarkable - are programmed not only to show off what the effect can do in a wide range of situations, but also to provide a solid library of instant glitch effects beyond which you may never need to venture. They mostly comprise a collection of generic glitch edits, which are actually very usable straight out of the box.

Obviously, what you get out of Glitch Bitch very much depends on what you feed into it, but it would be fair to say that it's one of the cleaner glitching effects we've come across, and we really appreciate Vengeance's unusual design strategy of making the presets a deeply integral element of the plugin.

Indeed, although the individual functions that Glitch Bitch performs could be closely approximated by chaining strings of free plugins together, we'd suggest that it's the presets - more than just the consolidation of these processes in a single plugin - that make it the viable, practical solution that it is.

Of course, with the effect essentially controlled by those hugely flexible n-point envelopes, the presets are highly customisable. There's even an internal sequencer for controlling all aspects of the plugin (including the Glitch trigger button) that can be used instead of manual live triggering and automation when you want to tightly fit your edits into the context of a specific track.

Regardless of your approach, though, Glitch Bitch is just the thing for modernising a beat, adding interest to a vocal, or increasing the intensity of a build-up or off-the-wall EDM riff. It probably won't do much for your three-piece folk band, but that should come as no surprise.

Our only major issue with it is the name, which (we assume) is meant to be funny but just comes across as awkwardly sexist and embarrassing.