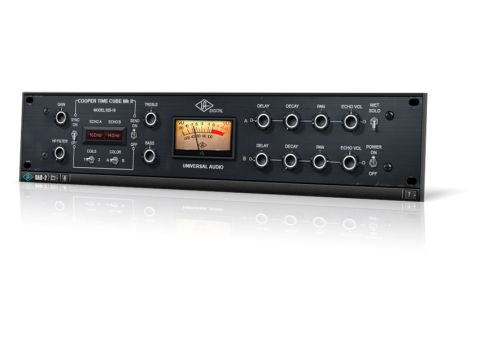 If you've got a UAD-2 card, this comes highly recommended. And if not, it might convince you that it's time to upgrade

The UAD range of plug-ins has always offered mainstream classics alongside more specialist processors, and the Cooper Time Cube Mk II definitely falls into the second category. But don't let that scare you off, as this delay unit offers a unique perspective on a commonplace effect.

In essence, UA has taken the early 1970s hardware, emulated its fundamentals and added more flexibility, including twin A and B delay lines of up to 2.5 seconds. As a result, you can use it like the original, or treat it as a regular delay, with the added benefit of the CTC flavour.

Central to this flavour is the hose design. Prior to the advent of digital delay, designers tried various techniques to create a flexible audio delay line, one of the most successful being the tape echo.

However, the CTC utilised a much simpler, mechanical approach: a length of hosepipe. By passing the original signal down a length of pipe, using dynamic mic capsules at each end as speaker and pickup, a useable delay of a few milliseconds was created.

For isolation, the pipes were suspended on springs in a sealed box. The pipes themselves needed some modification as well to create a flatter frequency response.

Use of two pipes created a parallel effect, with fixed delay times of 14ms and 16ms, and you could also patch them in series to create a 30ms delay. It all seems very crude today, but they made a useful pre-delay for EMT plate reverbs, whereas in a parallel arrangement a highly useable doubling effect could be had.

Another key factor was whether the delay coils were used in series or parallel, which is selectable here via the Coils knob. Other global settings include input gain (+/-15dB), sweepable high-pass filter (12dB/octave), bass and treble controls and a Color setting. This last option toggles between the original unit's frequency emphasis (A), or a more 'levelled' response (B).

Finally, you've also got tempo sync, effect send (this allows input to the delay circuit to be suppressed without cutting off existing echoes), and the delay readout for channels A and B.

Beyond this, and to the right of the VU meter, you get individual controls for each delay channel: delay time, feedback (Decay), panning and level (Echo Vol). To round things off - and handy if you're using CTC as an effect send - you can switch the unit to Wet Solo mode.

Paging through the 31 factory presets, you get an immediate impression of the CTC's split personality. In simple parallel patches with short timings (14ms and 16ms), the result is very much a doubling effect.

We found sticking with the classic filter emphasis and a single coil (ie, the original CTC settings) great for adding subtle richness to acoustic guitar, piano and vocals, and all without being 'phasey'.

Although there's no modulation option, the natural filter emphasis clearly imparts its own sound. And while the differences are subtle, Color B is brighter than A, with the twin-coil option giving darker-sounding results.

With medium-to-long delay time settings, the CTC moves away from its original restrictions of a doubling device and offers up small room ambiences, pseudo spring effects and, ultimately, traditional delay. It's here that the decay and tone controls really come into their own, and although there are plenty of plug-ins that can do this sort of thing, the CTC (like a tape delay) adds its own character to the mix.

Much like Roland's Dimension D (also available for UAD), the CTC has a sound that you'd struggle to achieve with a regular delay. And although the extra options make it a much more flexible affair than the hardware, it was the original CTC settings we kept returning to, and these are the big selling point.

However, there is one unique factor that may irk some long-term UAD users: this is the first plug-in that will only run on the new UAD-2 line of DSP cards.