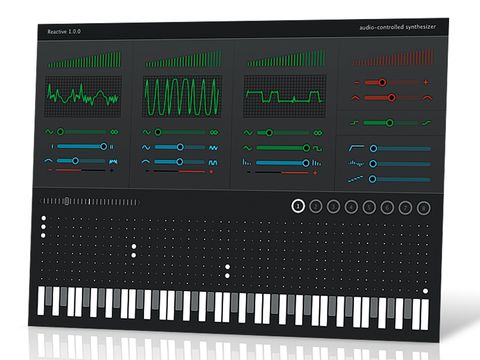 A really fun, creative but sonically limited tool that's well worth a punt at this price.

Sinevibes is known for producing original, creative plug-ins with a simple, functional aesthetic, and Reactive (AU only) continues this tradition.

Inserted into your plug‑in chain (on an audio or audio-outputting instrument channel), Reactive uses the incoming audio signal to generate melodies by converting the dynamic (volume) envelope into pitch information as specified in the eight-note pitch matrix. This pitch information, along with the dynamic envelope, is then delivered to a three-engine synth offering waveshape modelling, phase modulation and subtractive synthesis.

"The controls in Reactive are basic, but that needn't limit the results that can be achieved."

The controls for these synths are limited (a synth-less version that only spits out MIDI would be an interesting future addition), comprising just three engine-specific parameters per synth, as well as oscillator detune. The sound balance is then determined by setting the relative levels of each synth (and the original audio signal) in the mixer section before the combined signal makes its way to a master processing section.

This offers a high-pass filter(with cutoff as its sole parameter), sample rate reduction and bit depth reduction, which is good for adding crunchy bite and edge.

Hardcore synth heads might balk at the relatively simple controls on offer, but that would be missing the point. Reactive isn't a sound design tool - it's a compositional tool.

Well, we say compositional; the pitch matrix takes some getting used to (the input volume level determines which of its eight defined notes is triggered), but there is a useful randomise function that also serves as a great way to quickly learn how the matrix settings affect the patterns being generated.

Because it's dynamically controlled, Reactive works best with loud information - so drum loops and anything else with strong, sharp transients is ideal. And while it is primarily going to be used as a studio-based production tool, percussionists and beatboxers might also find a lot of potential in it for use as a live utility.

Reactive also lends itself particularly well touse in Ableton Live, because Live's various clip automation controls - such as Volume and Transpose - can be employed as de facto modulators for the plug-in in an intuitive and tweakable way. Also, Live's various warp modes can affect the punchiness of the synth transients in a subtle but useful way (the same is true of other DAWs with similarly adjustable stretching/warping).

Sinevibes claims that Reactive "turns any audio into melodies, basslines, strums, glitches, blips, wobbles or noises", and that is mostly true. What it produces would technically be called melodies, but they're not exactly symphonic or poptastic in nature. They are however eminently usable, particular when it comes to creating basslines and leads for electronic genres.

The taming of the tune

The controls in Reactive are basic, but that needn't limit the results that can be achieved. Instead of altering its parameters, for instance, you can process and modulate the audio input signal to affect the way Reactive interprets it.

In Ableton Live, this can be as simple as changing the pitch or timing (doubling and halving the speed of the audio can be fun too); but in any DAW it's worth throwing a few other plug-ins - such as delays, gates and even limiters - before it in your chain, as they can all be modulated for more fun and control. And you can even place one Reactive after another, of course!

There are three parameters for controlling Reactive's response: a Glide control, plus Sensitivity and Smoothness, which adjust the spread of the generated notes. We find the best way to approach things is to hit Record, jam for a while and then simply use the sections of the resulting automation that sound good.

Reactive won't transform your musical life, but it can be a great track-starter and a very current-sounding mix- and arrangement-filling tool. Even musical purists might appreciate the unusual types of patterns and modulations you can achieve with it.

Anybody making glitch, urban, minimal, tech or just about any other kind of modern electronic music will be able to find a good use for it. If you like to tinker and eschew conventional melodic approaches, then it's a no-brainer… but not a game-changer.