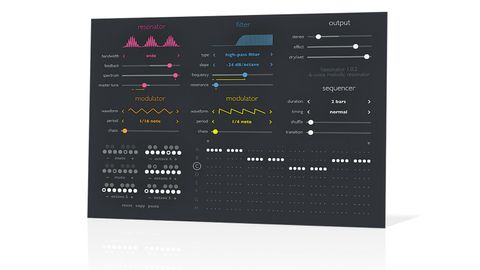 Decidedly mental but well worth a creative punt, Hexonator is another worthy addition to the Sinevibes catalogue.

The latest plugin from Ukranian developer Sinevibes, Hexonator is an AU effect plugin for Mac that generates 'chordal' harmonic content from whatever arrives at its input.

It does this by analysing the incoming audio signal, then amplifying the frequencies within it, matching those of a sequence of notes and/or chords defined by the user, adding harmonics based on them, while dramatically reducing all other frequencies. This process is all controlled by a series of seven modules...

The Resonator (actually six Resonators adjusted collectively) does the actual frequency separation, based on the selected notes/chords. It includes controls for setting the Bandwidth, Feedback (the intensity of the 'resonated' frequencies), Spectrum shift (offset between the band-pass filters and feedback delay lines at the core of the Resonators) and tuning.

The (resonant) Filter section features low-, high- and band-pass modes, and operates on all six Resonator voices of a chord. It's particularly useful for shaping overly bright drum loop processing and taming Hexonator-created bassline leads (a sound it particularly excels at). The Output section controls stereo spread (of Resonator voices), amplification of the Resonator output (the Effect slider) and wet/dry balance.

Of the two Modulators (LFOs), one modulates Resonator parameters and the other wobbles the Filter Cutoff and Resonance.

You can switch the LFO Waveform between a choice of eight shapes, adjust the Period (modulation speed) from 1/128 to 8 bars, and apply Chaos (a per- cycle random element). The modulation depth is set for each target using Sinevibes' colour- coded slider system, as seen in many of their recent releases.

The remaining three modules are Chord Constructor, Chord Sequencer Pattern and Sequencer settings. These are key to defining the frequencies to be highlighted and amplified, and are discussed in The sequencer.

If all this sounds quite out-there, that's because it is; but with certain types of sounds, the results can be absolutely awesome. It works incredibly well on basslines - particularly filtered ones with few high frequencies - effectively creating new and harmonically rich patterns based on, but not necessarily complementary to, the source signal. Vocal snippets can also be effectively enhanced, as can drab drum loops (using the wet/dry balance to keep things within some semblance of normality).

However, it can be quite difficult to get all the cool stuff you make using Hexonator to actually fit into the context of a track. We recommend applying it right at the start of a project, so it can serve as the basis for monstrous tracks that you wouldn't otherwise have made.

Trying to put the same preset on a few channels in your track in the hope that they'll sound coordinated simply won't work, as Hexonator's characteristic sounds depend totally on the nuances of the input.

Hexonator is an over-the-top effect that's hard enough to tame on its own, let alone when you start combining it with other track elements. You probably won't use it often, and after rinsing it on four or five tracks, most people won't touch it again for a year or two.

So is it a plugin you should buy? Hell yes. Deployed with caution, it can give you incredible and inspirational results, and at this price, it's worth the investment just for use on one track, never mind four.