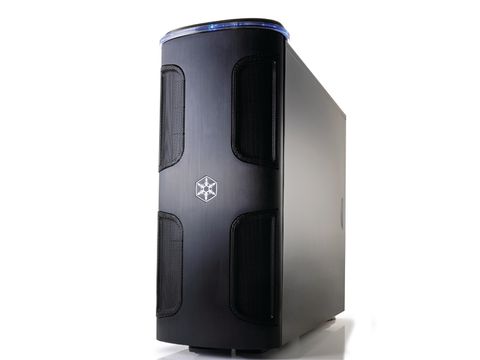 For anyone seeking a high-powered audio system, this excellent effort from Scan comes highly recommended.

The 3XS Power DAW is based around the Core i7 chip. This latest line of processors from Intel has four cores, each offering two virtual cores, so the OS sees it as an eight-core CPU.

This allows for dynamic load-balancing between pairs of virtual cores, and the chip has plenty of other performance-enhancing tricks to boot.

Scan's 3XS line offers custom-built PCs with numerous basic configurations to base your dream machine on, and the Power DAW is at the top of the audio range. It's packed into a handsome black aluminium case made by Silverstone, with the front panel controls hidden behind a door (which is entirely removable, if you find it an annoyance).

Rather handily, the power and reset switches are mounted on the top-front edge of the case, along with a pair of USB ports and a FireWire one - very convenient. The interior is very tidy, with plenty of space for future upgrades.

Sensibly, Scan's website makes it clear that its "Silent Option" doesn't mean the PC is literally silent, but it's still very stealthy, and is quieter than Rain's "virtually silent" Element i7. And it remains cool at all times, too.

Since we still had the Rain Recording Element i7 on our test bench, we decided to pit these two behemoths against each other - they have the same Core i7 920 CPU and Corsair RAM, so you might expect identical number-crunching performance.

Our tests were performed with each system set to the standard clock speed of 2.66GHz (the Rain is overclocked to 3GHz by default), with the same audio interface and buffer size, all in Cubase 5.

With D16's Redoptor using the default patch on Medium Quality mode, Scan's system managed 87 instances in Windows XP and 84 with Vista 64, while the Rain handled 78 instances under Vista 64.

As for hard drive performance, the Rain won here, being able to play back around 125 44.1kHz, 24-bit WAVs without glitching, whereas the Scan choked at just under 100.

In short, the Power DAW won through on sheer CPU grunt, seeming to be around 10% quicker, although the hard drives weren't as blazing. We spent some time tinkering with BIOS settings and the like, trying in vain to minimise the performance difference, and can only conclude that the Scan's Gigabyte motherboard is a better performer than the Rain's MSI one.

In summary, this is a highly impressive system, and it's clear that Scan has done its homework in choosing components. Finally, for your peace of mind, there's a one-year on-site warranty, and two-year return-to-base.