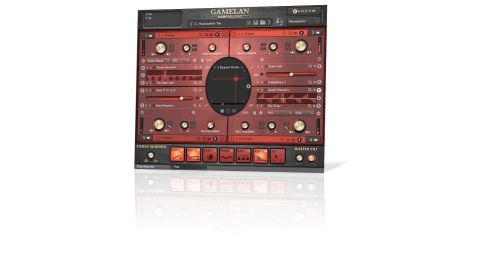 A breathtaking sample library with one of the best interfaces in the business.

With the merging of their Xosphere and Arpology Kontakt engines for Cinematic Guitars Infinity proving so successful, it was inevitable that Sample Logic would use its newly unified sample playback powerhouse as the basis for subsequent instruments, and the next one up is Gamelan.

Housing 780 "morphed and mutilated" (ie, processed and mixed up with other sources) Balinese gamelan instrument samples (one- shots and loops), Gamelan's soundbank was recorded at the famous Skywalker Sound studios and takes up 14GB of disk space.

Up to eight samples can be loaded at once in four two-layer "Soundcores", where they're blended, morphed and treated to all manner of effects (per-layer and Master), modulation, arpeggiation and step sequencing, for a seemingly infinite palette of dazzlingly complex melodic, harmonic, atonal and percussive sounds and patterns. The 260 multi Core presets make for an impressive showcase.

For its second outing, two major new features have been added to the engine.

The first is the amalgamation of what previously would have been separate Atmospheres, Loops, Instruments and Percussive NKIs into one, enabling them to be freely mixed between Soundcores within a patch.

This brings with it a category selection menu next to the Random button, which restricts the sound choices made by the randomisation process in order to have it only come up with sensible combinations - if 'sensible' is what you want, of course.

The second new addition is the Single Core View, which simply reduces the whole instrument down to a solo one- or-two-layer Soundcore, complete with 1400 presets.

Once again with Sample Logic, we find the pricetag a little hard to swallow, and with so many preset types involved (Single Core, multi Core, Soundcore and Sound Source!), Gamelan's menus can get a bit confusing. It also seems odd that we can't mix Single Core presets into a multi Core patch - you can only load them into Core 1.

Ultimately, though, Gamelan is our favourite of all SL's Kontakt libraries to date; Absolutely stunning.