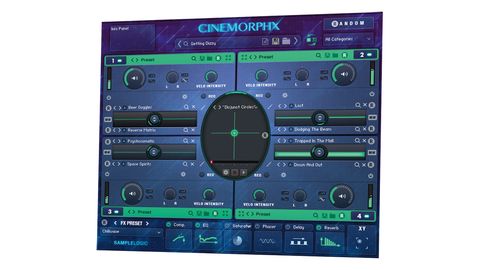 CinemorphX is up there with Spectrasonics Omnisphere when it comes to grand sound design, and we can't think of a bigger compliment than that.

With Sample Logic's new Kontakt-scripted engine now well established as one of the best around, the company have seen fit to 'port' a number of their legacy libraries over to it.

So, what we have here is a bringing together of Impacts, Ambience, Rhythms, The Elements and Synergy in a single 30GB instrument that far surpasses the capabilities of the originals. If you already own one or more of them, you can take advantage of crossgrade pricing, as detailed on the Sample Logic website, incidentally.

To quickly summarise the engine, it enables up to eight sounds to be paired up and mixed/ morphed in four 'Soundcores', which are independently processed with their own effects and modulation, mixed using the central "3D mixer", step sequenced and arpeggiated with the immensely powerful Step Animator, and processed beyond recognition by six Master FX. It's an astonishingly powerful system, albeit quite overwhelming at times.

Each new iteration of the Sample Logic engine brings with it at least one significant improvement, and this time round it's a fully flexible effects architecture. Each of CinemorphX's four per-Core and six Master FX slots can now be filled with one of 20 modules - Reverb, Delay, dynamics, EQ, various filters, distortions, modulation, etc.

As for the samples themselves, we don't have anywhere near the space to describe them in full, but we can sum up by saying that cinematic producers will think they've died and gone to heaven.

The 6000 Single Core and Multi-Core presets take in ambiences, textures, rhythm beds, melodic loops, one-shots and multisampled instruments of all kinds. Even with some inevitable crossover between some of the sounds, it's a dazzling resource, and mixing up and randomising Soundcores is fun and endlessly rewarding.

Our only two issues are the rather shallow preset categorisation (finding a synth is easy; finding a synth bass, say, is a trawl), and the price, which places it very firmly in the 'high end' bracket.