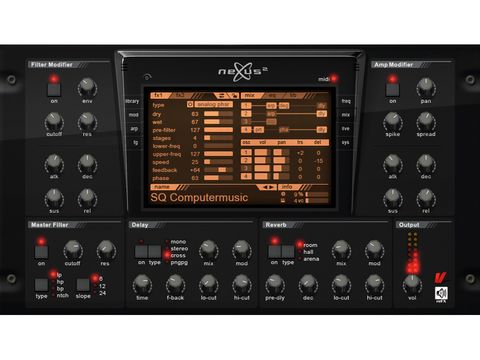 It's not a radical update, but this is a solid refinement, adding useful functionality to a sonically first-rate instrument.

Nexus2 is the kind of instrument that you go to when you don't want to spend time programming - it's a ROMpler rammed full of inspirational, pro-quality sounds.

Updates to the original Nexus brought many improvements, such as a new distortion effect, a polyphonic/chord arpeggiator mode with strum option, an internal limiter, and lock modes, so that sections retained settings when switching presets.

reFX claims that version 2 packs in more than 70 brand new features and refinements.

The Library tab enables you to browse the 762 factory presets via the faux-LCD screen. These are split into 16 subcategories, including Arpeggios, Dance Leads, Piano, Fantasy and Dream, Epic Pads, Gated Pads, Classical and more.

This amounts to 4GB of content created by Manuel Schleis, the golden-eared sound-wizard behind the acclaimed Vengeance series of dance sample discs. The manual says that "prohibitively expensive analogue hardware devices" have been sampled, and the kinds of synth patches that are tricky to recreate in software are much in evidence, such as Roland JP-8080 and Access Virus leads and pads.

'Real' instrument sounds feature less heavily, and are of the slick, 'workstation' variety.

Nexus2 remains a dance-music-focused product, and this is affirmed by the inclusion of an all-new expansion: Dance Vol. 2. This is in addition to the factory bank outlined above and adds 128 bang-up-to-date dance patches that are especially suited to trance, electro house and hard dance styles.

There are many downloadable expansions available to buy at the reFX site, covering a variety of genres and priced at €70 each. The latest two are Dance Vol. 3 and the C64-themed SID pack.

If you really feel like flashing the cash, you can buy new GUI skins, too. That said, Nexus2 now comes with, ahem, four skins as standard.

You can't create sounds from scratch using Nexus2, or import samples into it, but there are sound-shaping options aplenty. The front panel knobs and buttons are unchanged since v1, yet the LCD panel offers some neat new tricks.

The Mod screen offers control over vibrato, portamento and pitchbend (now with a +/-48 semitone range), but the main point of interest is the spruced-up modulation matrix. This now has over 100 destinations, and all effects (except ensemble) have at least one modulatable parameter.

Mod sources include the mod wheel, aftertouch, pitchbend, CC and host automation, and twin user LFOs. When we used the first version of Nexus we grumbled about the lack of those user LFOs (they eventually debuted in v1.2), so this time we're going to suggest that since the mod matrix is more powerful, there should be user ADSRs too.

Nexus2's arpeggiator and Trancegate each have their own page and are among the best we've seen. As well as the usual arpeggiator modes for up, down, order, and so on, Nexus2's has a mini-sequencer in which you can set the octave and - new for v2 - semitone transposition per step.

Sequences can be up to 32 steps long, and you can set the note length and velocity for each. The display zooms in and out as you adjust the length, so that the sequence always occupies its full width. Markers above the sequencer area show quarter-note beats and the current play position, and there's a movable loop-point marker.

Fans of funk will enjoy the new Shuffle option, although we'd like eighth-note swing, too. Strangely, the random mode didn't work - it gave the same results as the ordered one.

Whereas the arpeggiator triggers notes within the synth, the trancegate is an effect - it modulates the volume level, and can create choppy, gated trance pads. The length is now freely adjustable and new Delay and Fadein controls can introduce the gate effect gradually when a new note is played (we'd like this on the vibrato too). The marker and shuffle functionality of the arpeggiator are replicated here as well.

There are lots of preset patterns for the arp and trancegate, and you can also set odd pattern lengths for each to create shifting, prog-tastic polyrhythms.

The Mix screen offers perhaps the most useful new features. Nexus patches are built from up to four layers, and you can now mute layers and set their volume, panning, transpose and detune parameters. This is most welcome, and by stacking Nexus2 instances, you can effectively combine layers from separate patches.

As well as the front-panel delay and reverb, you now apply two global effects, rather than just one. They are: chorus, flanger, phaser, ensemble, degrader, distortion, phaser, and, new for v2, a stereo enhancer and an analogue phaser. A new preset librarian stores/recalls effects setups.

The stereo enhancer is handy and works on a given frequency range, but the analogue phaser is the real star. It's licensed from ArtsAcoustic (who also supplied Nexus's fantastic, pro-quality reverb) and gives a lush, smooth tone that distinguishes it from the existing phaser. It has more controls too, with adjustable upper/lower frequencies and up to 16 stages. With the Speed set to 0, the phaser's position can be directly manipulated using the lower frequency value, which is a destination in the mod matrix.

A proper parametric EQ has been added, with eight filter options for each of the four bands. Oddly, the values in the display don't correspond to the frequencies affected - when we dialled in a 5kHz boost, the peak was actually at 1kHz.

A few other minor glitches surfaced, though we should point out that the software was entirely stable. reFX are aware of the small issues with this version (2.0.4) and assure us they'll be fixed in an update.

Some computer musicians are quick to knock Nexus, and while it isn't a full-on synth, there is plenty of scope for taking a factory patch and twisting it into something different. Many of v2's additions are conducive to this, so the upgrade makes sense for existing users who want to get more out of the instrument.

For a huge bank of high-quality, ready-to-go synthetic tones for contemporary genres, it's hard to beat Nexus2. Many of the sounds are instantly inspiring in themselves, and the slick interface and preset categorisation help to keep that inspiration flowing.

We can't say that about every virtual instrument and the majority of them don't sound as good as Nexus2, either.

Listen to the types of sound that Nexus2 can produce: