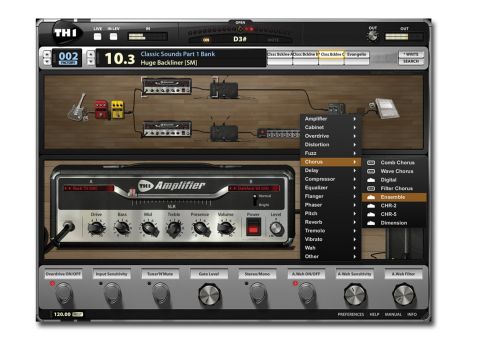 TH1 has so much going for it that it just might be the best all-round guitar software you can buy. Bravo, Overloud!

TH1 offers virtual amplifiers, pedals and rack effects that can be chained together, with a graphical representation that looks like real hardware.

First-time users will probably start by flicking through the well-structured, genre-savvy factory bank, as we did. We were particularly taken with the Solo Y J preset, which is presumably an imitation of Yngwie Malmsteen's signature Marshall sound - it sure sounds like it!

The top of the interface offers, among other things, a tuner and Global controls. The latter are non-patch-specific and enable you to switch input sensitivity, apply gating, dial in bass/treble EQ, and set the general reverb and delay mix.

The Overview panel depicts the signal path - to insert new modules, click a section of cable and choose from a menu. Reordering is achieved by dragging, and a dual amp/effects chain is possible because the cable splits and recombines with a simple mixer.

The Module View is for changing settings - click a module in the Overview to bring it into focus here, or drag the background to pan around. It's clear that serious thought has gone into TH1's super-slick interface - you can even resize it by dragging the bottom-right corner.

Overloud doesn't say which amps are modelled, but we're guessing from the names that they're a Fender Twin, Vox AC30, Marshall JTM45, Marshall JMP 'Master Volume', Marshall JCM900, Peavey 5150, and Mesa/Boogie Dual Rectifier, with all the channels you'd expect.

There's also one that appears to take after a Soldano design; this so-called SloDrive amp shouldn't be overlooked, as it offers a range of expressive tones.

Sonically, TH1 is very impressive. We found convincing twangy Strat sounds and those sought-after 'just breaking up' tones to be readily available. What's more, they stack up well against anything else on the market.

Cranking up the gain, we dare say that the full-on rock and heavy metal sounds surpass those of AmpliTube Metal. Once dialled in, they're heavy yet clear, punch at the right frequencies and sound great in the mix.

They're not as ballsy and grinding as a real amp, but this same criticism can be levelled at almost every digital amp simulation's hot-rodded tones, excepting perhaps those of (the CPU-intensive) ReValver Mk III from Peavey.

Speaking of which, the only TH1 amp we didn't get on with was the HeaVy51, presumably a Peavey 5150 emulation - it's too 'fizzy' on the Lead channel for us.

Each amp module enables you to select two models and morph between them using the SLR slider, creating a 'hybrid' amp model depending on its position. We didn't find this as exciting as it sounds, but it's cool nonetheless and often best used with compression to even out the levels.

The 12 overdrive/distortion/fuzz pedals can push the amps in thrilling new directions. We enjoyed the Diode69's honking überdrive and oversaturated, 'about to explode' effects. There are 15 phaser/flanger/chorus effects, ranging from deliberately digital shimmers to wobbly analogue emulations - all can operate in mono or stereo.

The four delays include a tape variant, and the rack reverbs are based on Breverb technology, so their sound quality is assured, but, sadly, there's no spring reverb.

Controlling amp software via MIDI can be tricky, but TH1's implementation is bang on, we think. Presets are switched via MIDI program change and, what's more, patch changes happen instantly, with no delay or drop-out - this is most desirable for live use.

Instead of directly controlling amp and effect parameters via MIDI (or host automation), you set up a maximum of eight Smart Controls - similar to the 'macro' knobs found in some soft synths. You can set each Smart Control to be a switch, a knob or a tap-tempo button, and give it a name.

By dragging a module onto a Smart Control, you can assign a module parameter to it. In fact, you can pile on as many as you like, for doing things like turning up the drive on the amp, decreasing the speed of the phaser, and lengthening delay time, all via a single knob.

For each one, you can set the minimum and maximum value and curve - the latter means you can, say, alter the response when binding an expression pedal to a wah.

Smart Controls are saved along with your presets, and the factory versions demonstrate how flexible they are.

In v1.0, the Smart Controls can only be adjusted by MIDI CCs 20-27, but Overloud assures us that v1.1 will enable mapping to any number, and there'll be new Smart Control types, too.

TH1's performance is incredibly impressive. The CPU hit is astonishingly low, so using multiple instances simultaneously in a mix is totally viable, as is glitch-free live performance. TH1 didn't crash or misbehave once during our testing and even ran without a hitch on a dinky Samsung NC10 netbook!

As for criticisms, first, there's no undo function, which is exasperating if you delete a module by accident. And, as well as a lack of spring reverb, there are no dedicated bass modules (but good bass tones can still be had).

It's been some time coming, but we applaud Overloud for putting the extra effort in to make TH1 a serious contender for best all-round guitar amp package, and we urge guitarists to put this one on their shortlist.

Furthermore, we've had a sneak peek at the imminent v1.1 update, which is packed with new features, and there's a cutdown, affordable version called TH1 Triode about to hit the shelves, too.

Listen to TH1 in action: