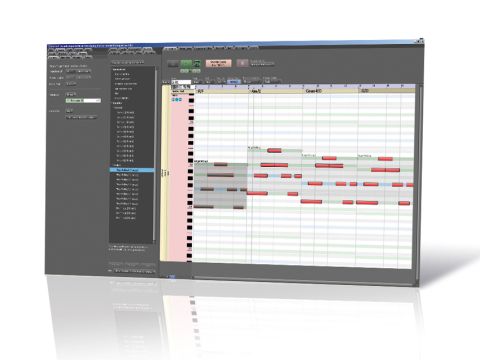 RapidComposer is billed as a 'music prototyping application', which means that it's designed to help you sketch out compositions.

From our experience with it over an extended review period, we've come to the conclusion that it's essentially based around an elaborate MIDI editor. Where this MIDI editor differs from that of a standard DAW is mainly down to its composer-friendly workflow.

"We see RapidComposer as an indispensable tool for anyone who needs to produce a large body of music in a short space of time."

Each project typically begins with the Master Track, which is where you set up the scales and chord progressions of the piece. This initial step is essential, since all events from here on in will intelligently 'match' themselves to the chord at that point.

It works because the MIDI parts - known as 'phrases' - are interpreted in a relative mode, as opposed to the absolute mode we're used to. RapidComposer knows how the notes of a phrase relate to the current chord and will adapt that phrase if and when you change the chord to which it belongs.

So where do the phrases come from? You can simply play them in via MIDI, create a new phrase with the Phrase Editor, or select one from a huge library of ready-made examples. Things get a little wilder when you get into using the Generator, which is actually capable of coming up with new musical phrases based on your specifications.

Once you're working with phrases, you can do all manner of useful things to them, changing the voicing, inversion or rhythm, perhaps - all the while confined to the boundaries of the Master Track's scale and chord (unless you specify otherwise).

Initially, we were quite stunned by how differently RapidComposer operates in comparison to a regular DAW - it looks like a DAW, but it's not a DAW. If you go into it expecting RapidComposer to work like Logic or Cubase, then you're likely to find yourself confused: it definitely requires a fresh perspective and an open mind.

Once you have the workflow down, though, it's incredibly freeing; and when you find yourself making complex edits by second nature, then its value becomes obvious. The nuances of RapidComposer have been tweaked to satisfy a composer - from the generating of phrases and variations, to the library of chords and the drag-and-drop interface. It's jam-packed full of sophisticated tricks and features to help you compose better music.

The playback of your composition is voiced through a selection of SoundFonts by default, but RapidComposer is also a VST host. We tested it with a number of synths and didn't have any problems, but the developers have warned that some third-party plug-ins might not work.

Notably, keyswitch compatibility has been implemented for a selection of popular ROMplers, so you can easily write articulations into your compositions and hear how they sound immediately.

On the other side of the coin, RapidComposer also comes in a VST plug-in version, so you can use it from within your DAW. This is one of the features we found most exciting, as it puts the power of musically intelligent MIDI editing right inside your production environment of choice.

You'll still ultimately have to export the generated standard MIDI file from RapidComposer and import it into your DAW's arrangement, but at least you can have both programs working at once.

Ultimately RapidComposer isn't for everyone. It probably won't help you to put together a minimal house track, and it doesn't have any bearing on such things as the mixdown (that would be missing the point).

We see it being an indispensable tool for anyone who needs to produce a large body of music in a short space of time, perhaps for scoring or sync work. Maybe your band could benefit from trying out your song ideas in exotic key signatures…

Unfortunately, at the time of writing, there seem to be a few stability issues, leading to regular crashes. Because of this, we feel that this great concept hasn't seen its full potential yet, but Music Developments assure us that a bug-fixing update is imminent.