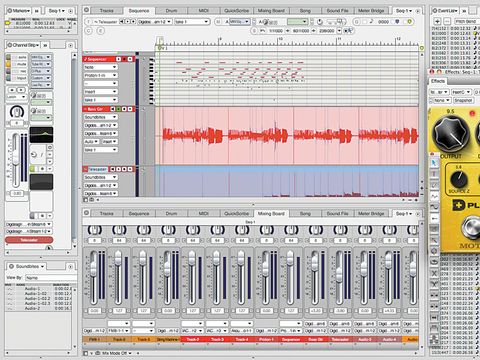 Not just for film score composers, Digital Performer should be considered by anyone seeking a first-class DAW.

Although you might not be intimately familiar with MOTU's Mac-only Digital Performer DAW, it's huge in the worlds of film, TV and sound design in the USA.

It's a monster of a program that combines the MIDI expertise of apps like Logic Pro with magnificent audio handling on a par with Pro Tools. There's certainly a case to be made for DP being one of the best choices for anyone seeking a new DAW, or, indeed, their first serious music application.

DP's audio recording, editing, grouping and so on are all handled very elegantly. There are also instant beat-slicing and audio quantising functions, which can give great results. Beyond that, there's real-time pitch automation on any monophonic audio track source, and individual audio clips have an optional non-destructive 'automation stream' that's applied whenever the clip plays. All of this can be quite demanding on your Mac, so you'll need a powerful machine to make the most of the more advanced real-time audio features.

MIDI tracks sit alongside audio tracks in the main Sequence and Track windows. The various editing methods cater to all tastes: event lists, graphical editors, drum-orientated step sequencers and score sheets are all here, and the depth and ease of manipulation is comparable to that of Logic Pro.

Instrument tracks are automatically twinned with MIDI channels and there are several handy instruments included in the package to cover most areas of music-making (although nothing to write home about when compared to, say, Logic's Sculpture or Pro Tools' Hybrid).

One area that's always been criticised in DP is the layout of its interface. As with any software, it's bound to take a little time to become familiar with its way of working, but MOTU doesn't always make it easy for newcomers to fathom its app. Proprietary language for common elements ('Sound Bites' for audio, 'Chunks' for a group of open songs) hampers understanding, and the plethora of confusing windows can be a frightening prospect to a newbie.

On a more positive note, the consolidated window has improved no end from earlier versions, and with a bit of delving, it's not hard to get your head around the arrangement and customisation of the various tabbed window options.

Worthy of special note is the aforementioned Chunks feature - it's this that makes DP so great for live playback, film scoring and other sound design-based work. You can have any number of Chunks open within a project and each can consist of individual songs or cues. This is quicker than opening and closing separate projects because shared samples, etc, don't have to be reloaded.

A new window tab gives you direct access to the channel strip of the selected track, much like in Logic. New on DP's channel strip are in-line EQ and dynamic controls - essentially these are just default inserts that can be switched on and off as required, which is a neat aid to working quickly and efficiently.

The compact interface can control any of DP's bundled EQs and compressors, including the MasterWorks series of vintage console EQs and dynamics models, which are certainly right up there with the best of bundled DAW plug-ins. It's very handy to be able to call these up without wading through vast plug-in folders. Unfortunately, the in-line chain is set to EQ followed by compression - the facility to toggle the order would be useful.

Still on the effects front, the V-Racks of previous DP versions are present and correct. A V-Rack is essentially a virtual effects rack that can be assigned to whatever instrument, aux or master track you like, but only now can you view them within the Mixing Desk window alongside your other tracks. Mixer automation has been enhanced with the addition of four 'range' modes that enable you to adjust mix automation only within a specified section, leaving data outside the range unaffected. It's a bit like punch in/out for automation and is most welcome - every little helps in speeding up the mixing process.

For those who require notation facilities, you can now create lead scores with lyrics and chord symbols, which can easily be printed (to paper or PDF) for other musicians.

Tooled up Digital Performer is compatible with Pro Tools in several ways. First off, AAF file interchange enables song sessions to be swapped seamlessly between Pro Tools and DP7. Brand new for DP7, however, is the ability to act as a fully integrated software front-end to Pro Tools HD hardware.

The most immediately exciting new aspect of DP7 is its guitar effects suite, including an amp sim plug-in, various stompboxes, and a cab and live room modeller, offering a range of tones.

The Custom '59 amp plug-in mimics three classic amps - Fender Bassman, Marshall JTM45 and Marshall JCM800 - and along with the usual tone and gain controls, enables you to customise them with different valves, preamp circuits and tone stacks. Even though the range of emulated amps is hardly comprehensive, the obtainable result is a very broad palette of authentic axe sounds. Sonically, we'd say the overall tone has more bite than Guitar Rig but isn't quite as tight as Amp Farm.

The range of foot pedals focuses on distortion, overdrive, fuzz and so on, with imitations of the Ibanez Tube Screamer and Super Tube, Pro Co Rat, Electro-Harmonix Big Muff and MXR Distortion+. A faux Boss Chorus and tweakable wah pedal round things off.

Last up is the LiveRoom|G speaker emulator, where you can arrange and balance four mics around your cab of choice. The two mono and one stereo pair can each be EQ'd, giving you the realistic controls you'd expect in a real recording environment. The results are quite natural, too, with the room sound being pleasingly raw.

When you get to know it, it's easy to feel sorry for Digital Performer, because it never seems to get the attention it deserves. Maybe with its revised layout and 'mainstream' features such as the great new guitar amp suite, though, DP's glory days could be just around the corner.