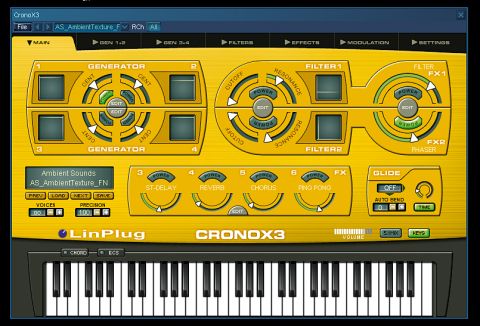 Look beyond its presets and you'll find CronoX3 to be a powerful and innovative synth.

When a product reaches version 2 and is still being widely ignored by the buying populace, questions start having to be asked.

With LinPlug's CronoX, the answer is simple. Its radical combination of sample-based synthesis and analogue style oscillators, combined with a moderately bewildering interface and an overly enigmatic name, surely turned more than a few punters off, despite the likes of us waxing lyrical about its free-thinking take on sound synthesis and sampling.

Shame. Now, with the launches of Albino 2 and SaxLab out of the way, LinPlug have turned their attention to CronoX once more, giving it an adrenaline injection that may cause the nonbelievers to revise their opinions.

Version 3's sound generation facilities have been radically enhanced to include not one, not two, but four Generators - double the number found in version 2.

These Generators are essentially semi-modular slots, into which you can place any one of four different sound generation modules. The first of these modules is a standard analogue oscillator that operates in a very similar manner to those in Albino.

The other three Generators are sample-based oscillators into which you can load your own samples. There are three of these in total: the Time Sampler, the Schrader and the Loop Sampler.

The Time Sampler is a single sample playback device that allows you to adjust the duration and pitch of the sample independently of each other in real time - the length of the sample can even be modulated from the mod matrix.

The Schrader Generator uses your sample as a wavetable. The speed dial is the key thing here, as it determines the playback speed of the entire keyboard range and allows you to generate some extremely interesting sounds from the most mundane of samples.

However, to get the best possible results, we'd recommend trying to use samples that are precisely in tune and have no regions of silence within them.

The Loop Sampler acts much like a conventional sampler engine. It can hold up to 64 samples and comes complete with velocity switching or crossfading, speed tracking and unison and tuning controls.

All of the Generators have adjustable tuning and a spread control - this enables you to generate unison signals and physically detune them to generate rich, full-on sounds without any loss in polyphony.

The Generators can be mixed and matched in almost any manner before being passed through the two filter modules in either series or parallel configurations.

Operating with a choice of 12 or 24dB roll-off slopes, and providing independent ADSFR envelopes, keytracking and saturation, these are certainly very capable filters.

However, they are slightly below the extraordinary standard set by Albino 2's superb Silk and Cream filters. After it's been filtered, the signal is routed to six effects slots.

The first two are hardwired from filters one and two; the signal is then combined and routed through effects three, four, five and six in series.

The effects section is far better than that in CronoX2, and features mono, stereo and ping-pong delays, plus a chorus, a phaser and a Flanger.

You'll also find a stereo enhancer, parametric EQ, a bitcrusher, a filter (essentially a duplicate of the main Generator filters), and the aptly named Gator.

This is a tempo-synced gate effect that can be programmed with a simple series of on and off switches. Interestingly, the Gator is capable of operating on both the left and right channels independently, paving the way for all manner of crazy stereo effects.

The final change comes in the shape of a vastly expanded modulation section. There are five ADSFR envelopes: the first two are hardwired to the amplitude of Generators one and two, the third is hardwired to the master output amplitude, and the last two are used as modulation sources that can be routed to any parameter using the mod matrix.

These envelopes sit alongside a built-in arpeggiator and four freely assignable LFOs, each of which offers a choice of six waveforms.

All of these can be tempo-synced to the host application. The two configurable ADSFR envelope generators and the four LFOs can be routed to virtually any internal destination using LinPlug's now famous modulation matrix - this has been plagiarised in many a virtual instrument since the original release of LinPlug Alpha.

CronoX 3's mod matrix offers ten source and destination slots - you can turn each modulation on or off either from the interface or from within the host.

As you'd expect, this veritable plethora of new features has meant a radical overhaul of the CronoX interface.

It would seem that LinPlug have ripped a page or two from Apple's instrument design manual, as CronoX3 looks rather similar to some of the Logic Pro plug-ins.

This is certainly no bad thing, however: CronoX3's GUI is ergonomically sound and represents a massive improvement over that of version 2. And so does the sound.

The four oscillators, extended modulation options, combined filters and extensive array of effects make this a seriously attractive proposition if you're tiring of sine/saw/square wave synthesis, and the ability to position any of the sound sources in a 5.1 surround setup opens up considerable mixing and expansion possibilities.

Factor in a competitive price, that sexy new look and an incredibly versatile approach to sound design, and CronoX3 makes for a fine instrument indeed.