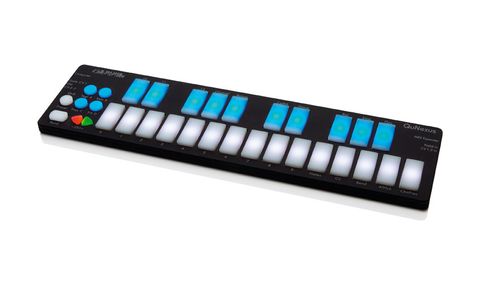 A personable little controller with a unique feature set that would make it a useful addition to any laptop bag.

Keith McMillen Instruments is an American company rapidly gaining a reputation for innovation in the field of hardware MIDI controllers. The QuNexus, its latest gadget, is an innovative micro-keyboard that manages to pack in a surprising amount of compelling features.

At just 12.8" long, only 3.3" deep, less than 1/2" thick and weighing a mere 345g, the QuNexus is small, light and rugged enough to be stuffed confidently into a laptop bag. It boasts the slab-like profile of a bar of expensive chocolate, which somehow lends it an upmarket appeal, with a matt-finish, grippy surface that makes it a pleasure to hold and use.

KMI's marketing material makes much of the unit's robustness, and although our tests stopped short of running it over with a car (as in KMI's own OTT stress test: http://bit.ly/QNstress), we did subject it to some prolonged and vigorous drum programming and prog-rock soloing, from which, thankfully, it emerged unscathed.

It's those "Smart Sensor" keys that really draw attention, though: 25 velocity-, tilt- and pressure-sensitive keypads with a satisfying, rubbery feel. They illuminate when touched, with white keys lighting up in white and black keys lighting up in blue. The front panel also houses a tiny (and, actually, not particularly usable) pitchbend pad, two octave shift buttons and five multifunction buttons, used mainly for preset selection (see Preset and correct).

For such a slim unit, the QuNexus is remarkably deep, particularly with regard to connectivity, the headline being its ability to act as a hub for connecting CV/Gate-equipped hardware and external MIDI modules. QuNexus also supports OSC.

The left-hand edge hosts the micro-USB socket that connects to your computer, and alongside this are two minijack sockets for CV output. On the right-hand edge sits a second micro-USB socket for connecting to KMI's £42 hardware MIDI Expander unit, which in turn lets you hook up any 5-pin MIDI-equipped device.

Next to this is another minijack socket that doubles as both expression pedal and CV input port. For an extra £22, you can also order a CV cable kit (if you don't already own your own CV cables, that is) with which to set the unit up for converting MIDI data to CV (control voltage) and vice versa, enabling old (or new!) CV-equipped hardware synths to be used with your modern DAW. That, in a unit of this price, is impressive, and if you like the idea of running analogue gear alongside your DAW, it's a real selling point.

From a performance point of view, while the lack of any rotary encoders or sliders is a definite drawback, the QuNexus does have a compensatory ace up its sleeve in the ability to tilt your finger backwards and forwards to produce pitchbend or modulation on individual keys, as well as using downward pressure to induce the same, with both actions separately assigned.

As deeply intriguing as this is, though, we came away feeling that getting the best out of it would require a fair bit of practise. It's all too easy to simply end up playing out of tune by hitting keys off centre, but with time spent properly configuring the pressure and tilt sensitivity to your playing style - and honing your technique - we can appreciate that this undoubtedly expressive system could work really well.

In terms of it's basic 'keyboardness', the obvious assumption with a unit as small as this is that it's not going to be particularly playable. However, the QuNexus plays nothing short of brilliantly. The 30x13mm keys are extremely responsive, and the only real issue you have to contend with is that they're arranged in two distinct rows: black keys above, white keys below.

This means that if you're used to incorporating the upper area of the white notes in your playing style, some slight fingering adjustments might be required. For example, when playing the first in♭version of a C minor triad with your thumb on E , second finger on G and fifth finger on C on a normal keyboard, you'd naturally position your hand towards the top of the keys. With the QuNexus, though, you have to tuck your second finger back below your hand in order to play the G note with your fingernail. Not a serious problem, certainly, but one requiring enough of an adjustment to slow you down a little.

For us, the QuNexus's real strength lies in the convenience of having an extremely portable device with you at all times that lets you input musical parts in a familiar fashion with minimum setup, whether you're in the studio, on the tube or in your local cafe. You can just chuck it in a laptop or iPad bag and forget it's there.

And on top of its obvious melodic functionality, it's also absolutely brilliant for programming drums, being essentially a set of pads. Throw in the tweakability offered by the editing software and its party-piece as a CV-to-MIDI converter, and the old adage about great things coming in small packages has rarely rung so true.