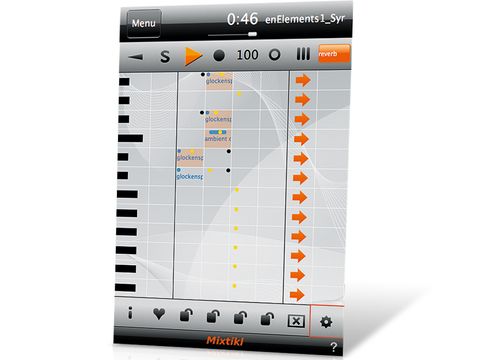 If you can see past the slightly ropey interface, you'll find a rich generative music app capable of compelling results.

Developed by the chaps who created Brian Eno's beloved Koan (a now-classic generative music application), Mixtikl is a cross-platform app for desktop and iOS devices, providing an environment where creativity and computation intermingle.

Like most generative programs, it doesn't come up with music at random, but instead offers suggested musical 'paths' based on your input and guidance. In other words, it enables you to make artistic and musical choices, rather than leaving it entirely up to the program.

Unlike many such applications, music made with Mixtikl can be as suited to the dancefloor as the halls of academia.

When we looked at v2 of Mixtikl, we noted that the results were almost invariably of high quality. However, we were less thrilled with the interface, which we branded "diabolical".

Version 4 cleans (and brightens) things up a bit, though there are still some design choices that left us mildly frustrated. It's clear that some compromises have been made to achieve cohesion between (virtually identical) desktop and mobile versions; the desktop ones come in standalone and VST/AU varieties.

As before, the action takes place in a sort of mixer grid, where loops, MIDI sound generators and synth sounds are imported. These bits of music have note information embedded within them.

You provide certain information (such as song key, tempo, scale) and Mixtikl will then generate musical elements based on all of the above.

The previous version required that you own another Intermorphic program called Noatikl if you wanted to edit the details of how the music is generated. No longer! This version offers direct access to inline Noatikl-style editing.

It's not as comprehensive as Noatikl (which is still best for creating stuff from scratch), but it's better than what came before and makes Mixtikl seem a more complete environment. Editing patterns can be a head-scratcher, but nevertheless, we were able to create some interesting variations - even if we weren't exactly sure how we did it!

One of the more interesting new features is built-in access to an online repository of mixes via Twitter. The promo video shows lots of mixes, ready to download and play.

However, when we attempted to access them via the Tweet Import feature, we were disappointed to find only a solitary pair. And when we went to a page where we could hear said mixes, we were presented only with a big black box and a note telling us that we should be running Safari in 32-bit mode.

The feature worked perfectly on the iPad, though, automatically loading the songs and engaging the transport. You can also tweet your own mixes (sans custom audio loops) in order to share them with others.

We're not sure why Twitter was chosen for this, except that it provides a fairly common meeting ground for idea-swapping. Nevertheless, it works seamlessly and quickly. If users get behind it, it could prove a neat way to rapidly exchange mixes.

Mixtikl now enables you to import Noatikl files from the clipboard. The collection of bundled and available-for-purchase 'Tiklpaks' is growing and the quality of the material is generally very good.

Many of the previously locked Tiklpaks are now unlocked, free of charge. In all, there are over 380 parts across 17 Tiklpaks, plus 30 loops.

Speaking of sounds, there's a new wavetable Tone unit in tow. The waves are General MIDI-esque, so nothing earth-shattering, but it's easy to add interest with other modules.

The look of the FX network editor has been given a once-over, and various menu items have been tweaked or simplified. Some of the items in the menu are still found in less-than-obvious locations (import of tweeted mixes is found in the More menu, for example, rather than the Import menu as you'd expect).

We liked Mixtikl back at v2 and we like it even more now. The interface is still problematic, especially in the desktop version, which seemed slow and clunky.

Still, although the developers may do things a bit differently, they should be commended for treading new paths rather than playing it safe. Some of those paths may lead up blind alleys, but there's a chance that they could lead to new and exciting places, too. And that's really what Mixtikl is all about, isn't it?