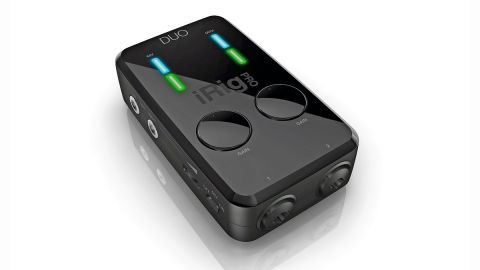 It's not going to feature the sexiest-sounding preamps, but as a utility for your music-making toolbox, then £149 is a bargain you cannot ignore.

It's also got everything you need from a two-channel audio interface - MIDI, phantom
power, direct monitoring, signal metering, combi XLR/Hi-Z inputs-- and can be either battery- or mains-powered.

The Pro DUO also feels more robust than some of its predecessors (a factor that has slightly bothered us about IK's audio interfaces in the past). The unit comes complete with a plethora of cabling for connecting to your devices of choice, including MIDI breakout cables.

One thing we did notice was that, as the batteries ran down, the unit became less stable. This is, of course, only a minor gripe and if you're out and about, just bring spares.

If you happen to run multiple devices when creating tracks, then you seriously need to consider this.