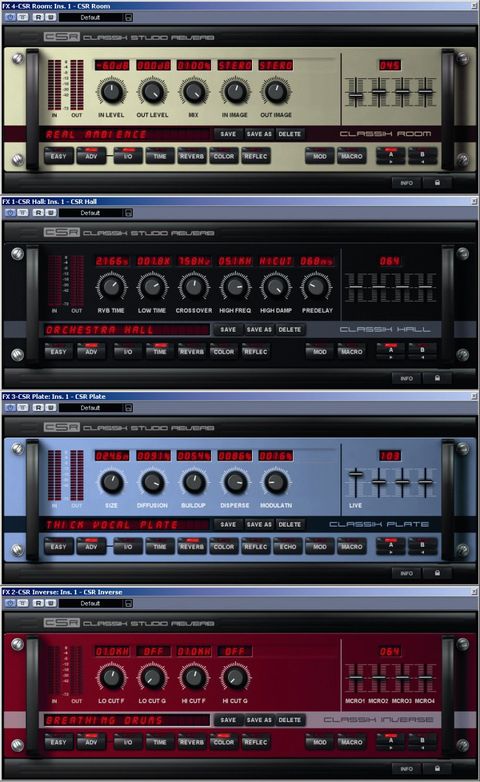 Convolution reverbs may be all the rage, but this classic, old-fashioned design produces superb results every time.

Spend just a short time on the internet and you'll come across some strange opinions. 'Buy any convolution reverb - they're all good,' states one blogger - but this simply isn't the case…

The quality of a reverb isn't determined by any programmatic algorithm - it's about attention to detail in the sound.

The truth is that you can actually make a reverb unit by clamping a 'Slinky' (a stair-walking spring toy) onto the bottom of an empty yoghurt pot.

Try it - it's a lot of fun and works surprisingly well, but the results you'll get demonstrate that studio-quality reverb is more about the fine-tuning of the approach and not the theoretical solution in itself.

After all, a plate reverb is simply a plate of suspended metal with a speaker-like 'thing' at one end and a couple of microphone-like 'things' at the opposing corners.

Don't laugh - they were used on classic records for many years and even by today's standards they sound superb.

Against this historical backdrop, IK Multimedia has shunned modern convolution reverb trends and chosen instead to model the older generation of conventional, top-end hardware-based DSP units.

This is a most welcome and refreshing change - think along the sonic lines of the Lexicon 224XL and the Quantec Room Simulator and you'll get a good idea of what CSR is all about.

Of course there was never any shortage of 'pretenders to the throne' in the rackmounted reverb stakes.

Yamaha made a worthy bid with their REV7 hardware, as did AMS with the ubiquitous RMX16.

Latterly, TC Electronic produced some fine reverbs, but unfortunately, they abandoned native plug-in development almost as quickly as they pioneered it (their focus is now on the PowerCore DSP system).

At the moment, it seems that the Jedi Masters of classic hardware reverb are reluctant to reinvent their products in software.

We should begin by saying that the four Classik Studio Reverb interfaces look simply beautiful.

They're almost works of art in their own right - it's like someone has put a 19-inch rackmount hardware unit in front of you. These attractive user interfaces can operate in two modes: Easy and Advanced.

When you're in Advanced mode, you get extra control pages called I/O, Time, Reverb, Colour, Reflec, Echo, Mod and Macro.

The last of these enables you to set up four sliders to control combinations of parameters, scaled however you want.

This means that you can program enhanced controls for the single-page Easy mode, and also gives you a convenient way of tweaking several parameters with a single slider.

Each of the presets has two comparison memories. The only minor niggle here is that the copy buttons are located directly under the A and B buttons, and consequently are too easy to click accidentally.

CSR's sound really is 'classic'. It's a set of plug-ins that does exactly what it says on the tin, and brings to mind the signature sounds of dozens of hit records.

The stereo imaging is superb, providing a natural and wide soundscape without any discernable 'hole-in-the-middle' artefacts (although they can be present if you need them to be).

Taken as a whole, the four plug-ins (called Plate, Room, Hall and Inverse) are capable of fulfilling all conventional reverb requirements.

Each one covers its ground so comprehensively that, in one product, you really do have all of the reverb types you'll need. As if that wasn't enough, the CPU requirements are remarkably favourable too.

In fact, it's very hard not to fall in love with Classik Studio Reverb from the moment you start using it.

There's very little to complain about: the user-interface is attractive and self-explanatory, but also flexible enough to enable experts to apply their own personal stamp to it. And the sound? It's simply gorgeous.

The only real issue is whether Classik Studio Reverb is worth the £229 asking price, and this is a tough call.

Free reverb plug-ins used to be rubbish, but not any more. In fact, they're more than good enough for many situations. It should also be remembered that many virtual instruments come with their own built-in reverbs.

So for many home studio musicians - perhaps even the majority - £229 is a lot to spend on reverb alone.

The truth is that the majority of their listeners will neither hear nor care about the difference. It's all a bit depressing really - CSR does deserve to be a massive hit, but the harsh, competitive reality is that it's going to be a tough sell in today's marketplace.

Nonetheless, and despite the abundance of high-quality reverbs we already have installed on our test machine, we can safely say that CSR will remain in our plug-in rack and undoubtedly be our reverb of choice from now on.

Classik Studio Reverb is, in a word, wonderful - let's just hope that people can afford it.