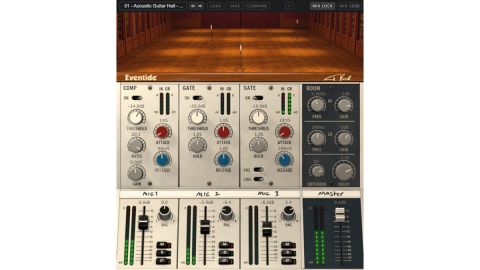 It's Eventide's first 'endorsed' plugin, and although some developers offer their own ranges of producer-backed designs (Waves, to give the obvious example), this has to be the most technique-specific example yet.

Tverb is split into two main sections: the Room at the top and the Console in the bottom two thirds. The Room graphic is styled after Hansa Berlin's large orchestral Meistersaal hall, where Heroeswas recorded, and includes three microphones, two freely positionable within the space, the other fixed.

The right-hand side of the console hosts Hi and Lo EQ, Diffusion and Decay (0.2-7 seconds) controls for tweaking the sound and size of the room.

The remainder of the interface comprises three desk-style channel strips, each connected to one of three microphones. The first is the main up-close vocal mic (the fixed one), which offers a choice of three polar patterns (cardioid, omnidirectional and figure-8), and has low- and high- cut filters onboard.

The purpose of the patterns and filters is to tailor the sound at source, as you would in reality; and although this is primarily a close mic, the omni and figure-8 patterns also capture some room sound.

Mics 2 and 3 are omnidirectional and can be independently dragged to anywhere in the space, providing left/right positioning and adjustment of near/far (5-70 feet) distance from the close mic position.

The channel strips include a Compressor for Mic 1 and separate Gates for Mics 2 and 3. The Gates can be linked for adjustment of both from one or the other, and switched to key directly from Mic 1 rather than their respective microphones.

At the bottom of the console, alongside each mic output fader are Mute, Solo, Phase Invert and - for stereo instances - Balance controls. Visconti's original technique was entirely mono, but with Tverb you get mono/ mono, mono/stereo and stereo/stereo instances, as you'd expect in this day and age.

Somewhat surprisingly, given the flexibility of its setup, Tverb is an algorithmic design (tuned in collaboration with Visconti), rather than a convolution reverb based on impulses sourced from Hansa. In fact, it effectively employs three separate reverbs - one for each mic.

The main parameters, set via the Room panel, are shared by all three, but moving Mics 2 and 3 influences their pre-delays and early reflections.

So, how does it sound? At its default Decay (2 seconds), the room is very smooth and pretty warm, working well with vocals, drums, and acoustic and electric guitar. Without adjusting the Decay, simply shifting the near/far position of the ambient mics delivers everything from quite a tight, short space to the full, beautifully reverberant two-second tail at maximum distance.

They enable plenty of sound tailoring, and we particularly like the depth-enhancing effect of spreading them left and right but at different distances from the close mic.

At the other extreme, muting the room mics and using just the close mic on omni setting is good for working in a bit of width without making the sound too reverberant - an effect that can be further developed using the compressor. Reducing the room Decay to anything less than 1 second with all three mics active provides a similar effect.

When it comes to longer Decay settings, anything up to around 4 seconds sounds good - beyond that the modulation in the reverb tail becomes increasingly obvious and annoying.

Tverb comes with 120 presets, taking in 74 pro contributions, including seven from Visconti himself. Given the gate-based design of the plugin, it's no surprise that many of the patches are geared up (and labelled accordingly) for use as insert effects, including some excellent gated drum and percussion presets.

The vocal processing on Heroes made a massive contribution to the sound of the track and inadvertently created a new production technique, so you'd be forgiven for assuming that Tverb is a reverential one-trick pony.

But it really isn't. Rather, by providing all the components of Visconti's original technique, including an excellent recreation of the space in which it was created, and full stereo operation, it stands as a great reverb - albeit a slightly quirky one, with just a single algorithm under the hood.

Of course, a similar arrangement could be constructed using multiple plugins, and would be even more flexible; but the sheer convenience of Tverb, the tuning of the hall, the free mic placement and the integrated dynamics processing all add up to a plugin far greater than the sum of its parts. It's a triumph and Bowie would have been proud.