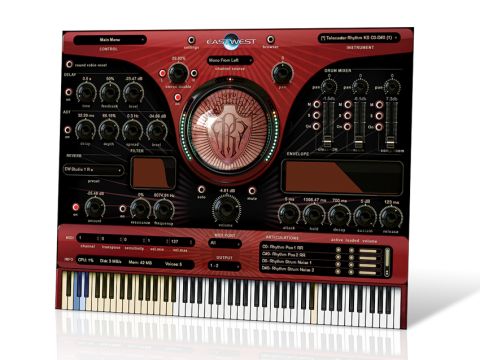 A well-executed and sensibly priced library that deserves a place among rock royalty.

Three years ago, EastWest responded to the needs of many a composer with their first collection dedicated to heavy rock instruments, Ministry Of Rock. The package featured bass, rhythm and lead guitars alongside heavyweight drum kits, all wrapped up in their Play sample-playback engine.

Now they've turned out a sequel, miking up more classic kits and guitars to create a new library that weighs in at 57GB, nearly three times the size of the original.

It's a Play 2-based instrument, and it runs as a VST, AU or RTAS plug-in, or as a standalone app. Ministry of Rock 2 isn't a replacement for the first edition; rather, it sits alongside it, providing additional patches at either end of the heaviness spectrum.

There are three distorted lead rock patches recorded from a Schecter seven-string, Danelectro baritone model (ie, extra-deep tuning), Gibson Les Paul, and the bridge pickup of a Carvin guitar - they're all as beefy as you'd hope.

You also get three rock/pop guitar presets that are clean and melodic, coming from a Fender Jaguar, a Telecaster and the neck pickup of the Carvin axe. The new drum kits, from DW, Ludwig and Gretsch, have some inventive aspects.

We especially love the ease with which the three drum kits can be mixed and matched in MOR 2. First you choose your basic kit and snare combination (from a possible six snares).

You then have options to replace kick, snare, toms, hi-hats or cymbals with any of the other kits' velocity-mapped samples. They all follow the same general MIDI mapping, so it's easy to write or import a MIDI drum line and then select your preferred elements from the kits.

Flam and "bounce" (think of a 'pressed' hit) samples for toms and snares are assigned to higher octaves. Three volume faders and pan knobs allow adjustment of alternative mic positions and compression.

Play 2 features some clever programming to ensure greater realism. For example, the engine detects when quick repetitions are being played and will automatically switch to a different set of round robin samples, recorded from faster playing.

One newly recorded bass guitar and some remastered content from EastWest's Hardcore Bass package rounds it off.

The installation was pretty tortuous, as we had to restart the whole process a couple of times after our discs failed to read. That's no joke for eight DVDs with a cited install time of 40+ minutes each. Next time we'll go for EastWest's pre-installed TeraPack hard drive instead.

Once up and running, the no-nonsense interface looked as classy as ever. It's been given a slight graphical rejig - for instance, the drum mic faders now appear on the main display.

So how does it perform? Quite simply, it rocks. All the guitars have 'playable presets' that vary the articulations based on mod wheel, keyswitch and velocity values. Alternatively, each articulation is loadable as an 'element' patch.

We put together some quite realistic examples using the playable keyswitch patches before realising that the articulations aren't mapped universally and so don't translate between the different guitars.

This meant some annoying tweaking when we decided to swap our chosen axe mid-arrangement. Using the elements patches and writing parts over several tracks allows greater flexibility in the long run.

The guitar samples are crisp and clean, and many have dual-channel recordings with an amped version on the right channel and direct signal on the left. This provides serious versatility as the direct signal can be processed by your favourite amp sim plug-ins.

We did notice occasional digital popping/clicking at the start of some notes, especially with the drum kits - it seems that a few other users have experienced this too.

The good news is that EastWest let us have a go with the beta version of the forthcoming Play 3, and this cured the issue - patches loaded way faster too. Play 3 also promises 64-bit OS X compatibility.

Unless you've got a rock band stashed away in your garage, MOR2 is a must-have if you crave stadium-sized guitar or drum performances. With a bit of careful programming, the instruments can at times sound scarily close to the real thing.

Kudos to EastWest for this great expansion upon the original MOR concept.

Now listen to our audio demos to hear Ministry Of Rock 2 in action: