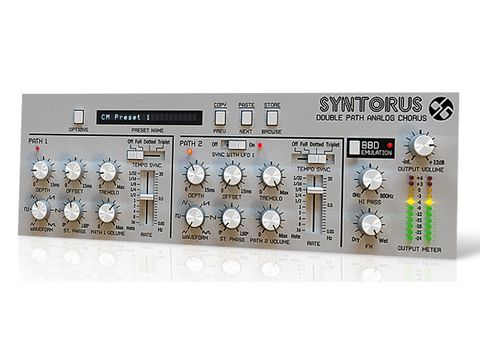 Syntorus is one of the sweetest chorus plug-ins out there, and its flexibility means that it's no one-trick pony.

Chorus effects have been around for decades, in the shape of analogue guitar pedals (from Boss, Electro-Harmonix et al), digital rack units (think TC and Eventide) and even built into vintage analogue synths (see Roland's Juno series and string synths like the ARP Solina). Many have achieved cult status, but it's fair to say that truly great chorus plug-ins are a rarity.

D16 Group's latest SilverLine effect, Syntorus, however, is just such a thing. Syntorus is a dual path/voice design, with a bank of identical controls per path. Offset sets the minimum delay amount, while Depth is the modulation amount, with movement governed by the LFO.

Chorus uses an LFO to modulate the length of each path's delay line, and Syntorus's LFOs are pretty capable, providing a fair range of e­ffects. The Rate slider sets the LFO frequency, which can be free running (0‑20Hz) or tempo synced to anything from 16 bars down to a 32nd-note, with full, dotted and triplet options.

You can pick from one of six LFO waveforms: triangle, square, sine, ramp up, ramp down and random. Unsurprisingly, triangle and sine are the most usable, giving the smoothest results, but the others can be good for special e­ffects.

The Stereo Phase knob adjusts the relative phase of the LFO used to modulate the left and right channels - increasing it gives a wide sound, even when using only one path, while at zero you get a mono chorus, like a guitar pedal. There's also a switch on the second path for syncing its LFO with that of the f­irst.

The remaining path controls on Syntorus are a volume knob and tremolo, which causes the amplitude to pulse in time with the LFO - a very cool feature.

The knobs on the far right control the dry/wet mix, high-pass filter frequency (applied to the wet signal only), and output level. Finally, there's the BBD Emulation option, which simulates an analogue bucket-brigade delay line.

When using only one path and with the BBD option off, Syntorus is similar to any other quality single-voice chorus plug-in. However, it really comes into its own when you bring in both voices, bringing to mind the lush, foolproof chorusing that we took for granted back in the hardware days, and giving anything from gentle 'watery' effects on through to rapid wobbles.

It quickly becomes apparent that Syntorus's flexibility gives it the edge over common chorus plug-ins, and the presets demonstrate its range, featuring everything from imitations of 'famous' chorus tones to special effects (using the tremolo on both paths as a rhythmic gate, for example). As with other SilverLine plug-ins, there's a preset manager and MIDI learn.

We tried Syntorus on synths, guitars, bass, hi-hats and more, and were pleased with how it can make staid sounds stand out in a mix or, conversely, be used to diffuse overly edgy ones. Placing Syntorus before an amp sim plug-in also enabled us to use it as a virtual stompbox. In fact, with the plethora of options, you can dial in a sound to suit pretty much any instrument.

The high-pass filter is a no-brainer for preserving bass frequencies, while the BBD simulation subdues the treble of the wet signal, which sounds more old school, but also makes the high frequencies less fizzy and the dry signal more defined. We also found that with the LFO sync option on, simple flanger-style swooshing could be achieved with subtly different Offset and Depth values for each path.

If we were to devise a wishlist, we'd like a pan knob per path (handy for fake double tracking effects, with the dry and wet parts panned left and right) and a feedback control for full-on flanger effects. Such wishful thinking aside, though, D16 has pretty much nailed chorus with this gorgeous, flexible plug-in.

Listen to what Syntorus can do to a range of material: