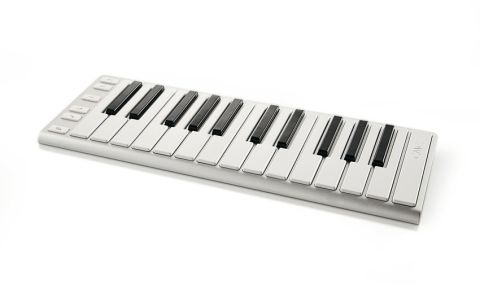 A stylish, full-featured MIDI keyboard that plays very well, fits in a (large) laptop bag and comes in at a price that is very reasonable.

Right from picking up the box, CME's new compact Xkey MIDI keyboard makes a great impression. It's clear that they're angling for a spot in the Apple Store, with that minimalist white packaging, aluminium frame (concealing a black plastic base underneath) and quirky orange USB cable, and in terms of fulfilling the aesthetic requirement, we'd say they deserve some shelf space.

Compatible with Mac, PC, iOS and Android, class-compliant (so no drivers required) and USB bus-powered, the Xkey manages to be very low-profile (a mere 16mm deep) yet still retaining a decent amount of key travel, making it surprisingly playable.

The keys themselves are standard size and you get two octaves of them. The black keys are very slightly raised above the white ones, and all of them trigger consistently along their entire length - again, this can only help in terms of playability. Perhaps the biggest selling point of the Xkey is its ability to transmit polyphonic aftertouch.

While this particular function isn't the rarity it once was, it is still pretty impressive on a keyboard in this price range. And it works well, too, introducing an extra layer of per-key expression when triggering aftertouch- compatible instruments.

A series of rather oddly labeled buttons arranged down the left-hand end of the 'board handle octave up/down, modulation, pitchbend and sustain on/off. The octave shift and sustain toggle buttons do exactly what you'd expect, but the pressure-sensitive pitchbend and modulation buttons are a little less straightforward.

They all work, certainly, with increased finger pressure deepening the up/ down bend or modulation, but achieving any real degree of accuracy is pretty much impossible, since maintaining an intermediate level of finger pressure between 'none' and 'full' is a haphazard exercise at best.

That aside, the Xkey is a stylish, full-featured MIDI keyboard that plays very well, fits in a (large) laptop bag and comes in at a price that can only be described as very reasonable.