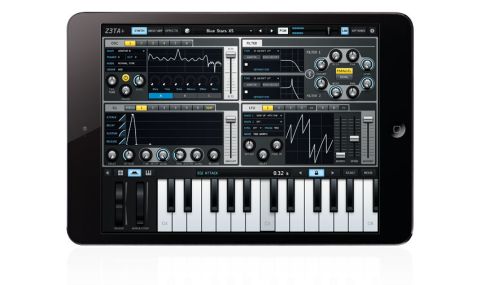 Z3TA+ is immediately one of the best synths on iPad - just as it is on Mac and PC.

Putting the dishwater-dull ScratchPad firmly behind it, Cakewalk's second iPad release is the one we've been waiting for: an iOS version of its phenomenal Z3TA+ 2 Mac/PC synth. And it's not a cut-down - this is the full Z3TA+ 2, enhanced in many respects by being on a touchscreen device.

Z3TA+ is an extraordinarily powerful six-oscillator (each with eight unison voices), dual-filter synth with a ridiculous amount of modulation onboard, including a "circular inter- modulation scheme" that enables each oscillator to hard sync or frequency/ring/phase modulate the next.

The jewel in the crown, though, is the extensive range of onboard oscillator waveshapes, which can be skewed, warped and generally reshaped via 16 controls in the Shaper window to create some of the most complex, weird sounds you'll ever hear from a synthesiser.

There's a 16-slot modulation matrix (and yes, the Shaper controls are among its many targets!), six high-quality effects, an arpeggiator with over 300 preset note and gate patterns (or import your own via MIDI), and an X/Y controller for easy performance control.

Inter-App Audio and Audiobus are, of course, both supported, as is MIDI input, and around 500 presets from the 1000-strong Z3TA+ 2 library are included.

The only flies in the ointment are the endless tapping required to step through incremental controls (Tranpose, etc) - a really dumb system that needs replacing with conventional spinners or menus - and (understandably) rather high CPU usage with more involved patches. With so much control and information packed into the iPad screen, it can also be a bit overwhelming at times - synthesis newbies be warned!

Those minor points aside, Z3TA+ is immediately one of the best synths on iPad - just as it is on Mac and PC. It must be a strange feeling for major developers to have to price their iOS synths so much lower than their direct desktop equivalents, but their loss is very much our gain, as this essential app proves.