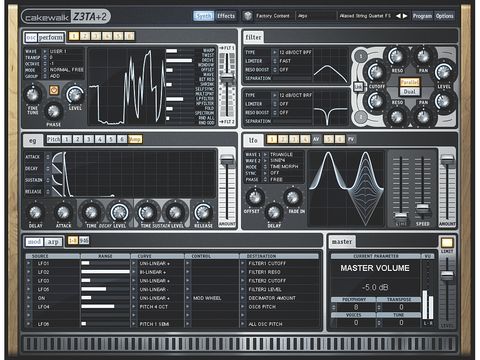 A solid update sees this seasoned synth back in action. A welcome return.

Like friends, soft synths come and go, but only a few will be there for you year after year. In this sense, Z3TA+ is a firm ally of ours.

It's been that way ever since the first version, programmed by René Ceballos of rgc:audio, debuted in 2002. A few years later, Cakewalk took on rgc:audio, and in 2007 gave us Z3TA+ 1.5. After that, though, it looked as if Z3TA+ was going nowhere, until v2 was unexpectedly announced a few months back.

While the interface has had a significant functional and aesthetic makeover, the synthesis architecture hasn't changed.

Each oscillator is connected to the next, in a circular fashion, so the sixth feeds back to the first. The Group controls determine how they interact: the Add mode mixes them, like normal synth oscillators, but you can also use ring, phase or frequency modulation and hard sync.

Already this gives the oscillators potential for everything from smooth analogue tones to the weirdest, dirtiest noises imaginable.

The part of your brain that deals with soft synthesis is no doubt throbbing already, but get a load of this: each oscillator has a waveshaper with 16 sliders for radically reshaping the waveform.

Some are self-explanatory, such as LP and HP Filter, but others have an abstract effect that cannot be described.

There are four new waveshaping styles: Random All, Random Odd, Fold and our favourite - Spectrum.

In previous versions of Cakewalk Z3TA+, wiggling the waveshaping sliders showed potential for some cool sounds, but frustratingly, you couldn't target them using the modulation matrix.

Well, now you can, and this is perhaps the most exciting new feature of Z3TA+ 2 in terms of raw synthesis power.

Of the dual filters, in addition to the nine variations on low-pass/high-pass/band-pass/band-reject (which are decent, but not breath-taking) and formant filter, there are three new stacked resonant modes (which make use of the new Separation control) and a comb filter.

When pushed, these additions can lead to rasping, squealing sonic mayhem that's great for contemporary dance genres, and the per-filter limiter option can keep them under control.

The filters can be arranged in serial (Dual) or parallel fashion and panned individually. The way Z3TA+ 2 handles stereo signals (ie, when using stereo unison oscillators) is still limited, however, because when you run the filters in parallel, they operate in mono, and you thus need to use both of them to achieve stereo filtering.

The mod matrix is much the same as before, with 16 slots and Range, Curve and Control columns for more control than most synths, but it's not so intuitive compared to more visual modulation schemes, such as in NI's Massive.

One thing we're not keen on is the non-standard labelling of tempo sync modes, where '1' means one quarter note (ie, one beat), '1/4' means a 16th-note, etc. Weird.

Oversampling options are the same, going up to 2x (but no higher). There is a new 'Highest' option for wavetable quality that can reduce artifacts in certain grungey patches.

There are a few new performance features for Z3TA+ 2, and the most novel is Adaptive Pitchbend.

Normally, when you use the pitchbend wheel, the wheel's maximum always gives, say, a two-semitone increase. Thus it's pretty easy to bend notes out of key. Not so with Adaptive Pitchbend. Enable this, set the desired key, and the maximum travel of the pitch wheel always gives a note that's in key.

It even works on chords, reconfiguring major triads to minor on the fly, for example. If you don't want to play in a fixed key, there's an adaptive mode that will attempt to follow you, and it works quite well.

In use, this is all tremendous fun and very inspiring, whether you're a grade-eight wiz on the keys or a one-fingered plonker.

Elsewhere, there's an XY pad mod source that can be controlled by MIDI or even a joystick.

Finally, the arpeggiator has been improved, now displaying the pattern (note that it's not an editor).

There are also Humanize and Swing controls (the latter lacks the option to swing eighth-notes or 16th-notes, however), and most excitingly, the option to import any MIDI file as a pattern.

This latter feature was actually present in previous versions, yet it never seemed to work properly. It does now, though!

The effects (distortion, modulation, delay, compression, reverb, EQ/amp sim) can now be dragged into any order, making them all the more useful.

The Distortion module has new routing modes, and its Smart Shaper is replaced by the HyperTube mode, which sounds similar but seems capable of a tad more grit without compromising clarity, and so works well on chords and complex patches.

Oddly, Valve Amp mode now offers slightly more drive, but the Heavy Metal option has far less, and is now the meekest of the lot.

Oh, and there's no effects version of Z3TA+ this time around. Shame!

Previously, Z3TA+ attracted microtuning fanatics with its multiple optional tuning styles and ability to import tuning files. These features have disappeared for v2 - we're sad to see such forward-thinking geekery struck off the list.

Cakewalk Z3TA+ was always known for its masses of great patches, and as well as a bank of classic Z3TA+ patches, there are more than 1,000 new ones that really do show off what the synth can do.

While the underlying sound engine hasn't changed much, the sound quality stands up to other modern soft synths, especially since it's now more feasible to pile on lots of oscillators and leave the 2x oversampling on as standard.

We'd recommend Z3TA+ 2 to anyone looking for a powerhouse synth, especially at just £69.

If you're a newcomer to synthesis, expecting to make all your sounds from scratch, you could be out of your depth, although it's great as a 'preset machine', and it's easy enough to tweak presets to your taste.

Those who will get the most out of Z3TA+ 2, however, will be hardcore synthesists and sound designers, for whom a world of aural exploration awaits.

Now listen to our audio demos to hear the Z3TA+ 2 in action: