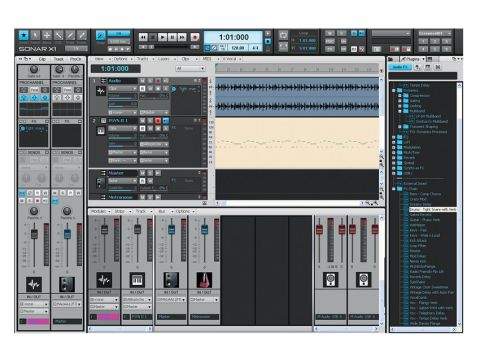 We're accustomed to seeing a new version of Sonar each year, but last time around we got v8.5 instead of the expected v9. (It was a feature-packed update all the same.)

Now, Cakewalk has hurled another curve ball by giving us Sonar X1, effectively resetting their version counter. Sure, it's essentially Sonar 9 by another name, but it's also indicative of the serious overhaul that's been undertaken.

For those unfamiliar with it, Sonar is a PC DAW that provides everything you need to make quality tracks from start to finish. It's got several great synthesisers, a virtual piano, drum kits, mixing effects galore, audio features like timing adjustment (Audio Snap) and pitch correction (V-Vocal), and lots more. We're looking at the full Producer Edition.

The big new feature for Sonar X1 isn't a sexy new plug-in or editing tool, but a revised interface. Now, don't get us wrong; we liked the old Sonar. A lot. But it had begun to creak under the weight of nearly a decade of feature-creep, and its plethora of icons and obscure key commands could be intimidating.

Sonar X1, on the other hand, is clean, uncluttered and inviting - a vast, vast improvement. It could be mistaken for a totally new product, but the Sonar we know and love is hiding just beneath that slick new exterior.

Cakewalk have clearly listened to their users and taken note of the better ideas found in competing products. Anyone previously put off by Sonar's GUI should take a fresh look at it, while old-timers may well feel a newfound sense of speed and freedom once they get used to it.

The old look is still apparent in the clips and the Track view. However, the tabs at the bottom of the latter for I/O options, FX bin and so on are gone. All such options are now available in the Inspector, which, in typical DAW fashion, exists as a strip down the left-hand side.

The Inspector itself is tabbed so you can choose to view the Channel Strip, expand the ProChannel (more on this later), view clip options, etc. Plus, it shows the channel strip for the selected track or bus and that of its assigned output. Just like Logic!

The Browser is now a dockable (or floatable) tabbed window for quick access to plug-ins, media, presets and other things. You can drag plug-ins or audio into a track, FX bin, loop-slicer or wherever is appropriate.

Alas, it doesn't work in reverse, so you can't drag an audio clip back into the Browser. Still, the new design is tightly integrated and speeds things up considerably.

The Browser, Piano Roll, Mixer and other windows (including plug-ins), can be docked in the MultiDock. This collapsible, floatable pane can itself be moved around or stuck on a separate monitor.

The Control Bar replaces the old transport bar and numerous toolbars that once cramped Sonar's style. It's customisable, with modules for markers, loop recording, quantise, ACT and more. You can stick it up top, down below, or float the thing.

So, several of the GUI elements can be expanded, collapsed, floated, docked and otherwise rearranged. You can save and toggle between configurations using the Screensets. This new interface arrangement/management system is collectively known as Skylight.

One of the most impressive new ideas comes in the form of Smart tools. Here, a single tool changes functionality depending on what you're doing. It works wonderfully and unobtrusively, switching from, say, a selection tool when hovering over data, to a pencil for notes in the piano roll. You can still choose tools manually, too.

Sonar has always had a solid selection of mixing plug-ins, but our expectations have been upped considerably in recent years by third-party efforts, not to mention the SSL-modelled mixer integrated into Propellerhead's Record.

Perhaps taking inspiration from the latter, Cakewalk has blessed Sonar with ProChannel, a powerful channel-strip that's not a plug-in but is instead built right into each channel. It features a superb EQ, analogue-style saturation and some very tasty compression options.

The EQ is a four-band affair with adjustable Q, level and frequencies for each band. The low and high bands toggle between peak and shelving modes. You can switch between vintage, modern and pure characteristics, and there are also high-/low-pass filters with the slope adjustable from 6 to 48dB/octave in 6dB increments. Oh, and there's a Gloss button, which adds "air" at the push of a switch.

This EQ certainly packs a lot into its small GUI footprint. ProChannel's compressor has two modes. First is the PC76, which is obviously patterned after the industry standard Urei 1176. It offers five ratios (including an infinite option) and attack, release, input and output knobs.

A flick of a switch calls up the PC4K option, an SSL-alike with a GUI to match. This one sports attack, release, fully adjustable ratio and make-up gain, and the ability to perform sidechaining (via the built-in high-pass filter or an external input).

We tended towards the simplicity of the PC76, but both sound superb and are not your average DAW-bundled efforts. Both have dry/wet knobs, too, for easy parallel compression.

ProChannel's final trick is a tube saturation emulator. There are two modes, and the parameters are simple: input, output and drive. The sound is terrific, particularly for subtle sweetening. We can see it being applied discreetly on the master bus.

A routing strip at the bottom of ProChannel lets you drag its three modules into any order, and you can place ProChannel itself before or after the track's insert effects bin. You can disable any or all modules, too.

Speaking of routing, multiple effects can now be slung together and treated as a single FX Chain (you can still access plug-ins individually). Chains can be stored for later recall, but they can't include instruments or MIDI effects.

There is, of course, some new audio and MIDI content, with 1.2GB of sample material from Loopmasters and Sample Magic. Loops are in REX format, and it should be pointed out that Sonar now supports 64-bit REX files. The content is diverse and of the highest quality.

There are plenty of minor tweaks, too. Clip fades are finally reflected in the clip's waveform display. We also like the Edit Filter, which enables you to show only the automation envelopes that you want to work on (there are still no automation lanes, but Cakewalk say they're coming at some point).

The new Key Clusters scheme attempts to make logical sense of the way key commands are grouped (eg, all looping commands are available via the L key and various modifiers - Alt/Shift/Ctrl), and they succeed as well as can be expected. And there's plenty more that we simply don't have the space to cover!

Sonar X1 performed like a champ, even though our test machine (with Intel Core 2 Duo 2.4GHz CPU and 3GB RAM) was, on paper, slightly under spec for the job. We could run up to 30 ProChannels at once, with the 76 compressor, tube saturation and all EQ bands active - not bad for a below-par setup!

Maybe Cakewalk's system recommendations are playing it safe, or they expect users to pile on more plug-ins than we did. Whatever the reason, we suffered no dropouts or other ill behaviour during normal use.

Cakewalk took a big chance with X1 - and it's paid off. Handled poorly, such sweeping changes could have alienated existing users. Thankfully, it's tightly woven, well thought-out and a joy to use.

We found the transition to be immediate, if not instantaneous. If you're a long-time user, don't mistake the new interface for a new look - this upgrade could make your music-making experiences more about you and less about your DAW.

If you're new to Sonar then there's never been a better time to get into it. And for users both new and old, ProChannel should not be underestimated - it sounds killer and the direct integration means it's always on hand.

To sum up, with Sonar X1, Cakewalk has shortened the winding pathway between your imagination and the sounds coming out of the speakers. That, surely, is the best upgrade that anyone could ask for.

Now listen to our audio demos to hear Sonar X1 in action: