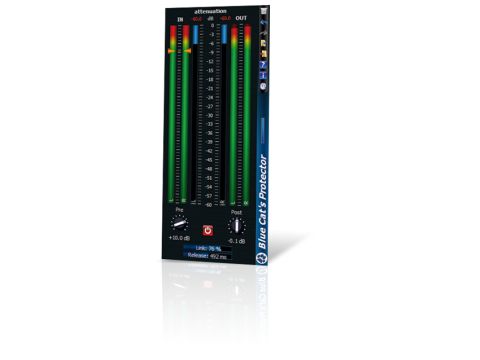 More than a mere limiter, Protector has quite a range of applications. What's more, it sounds great and is very keenly-priced.

Protector is a dynamic limiter. Used on the master bus, it catches loud incidental peaks and transparently softens them, preventing nasty digital clipping without the need to turn the volume of your entire project down.

This is the plug-in's primary function, but Protector has many other tricks up its sleeve, too.

If you're into compression, you probably already know that a limiter is often described as a compressor with an extremely high, fixed ratio. Where a compressor would typically reduce amplitude by a certain amount after it passes the threshold, you'd expect a limiter to restrict the amplitude completely when it exceeds that point.

Limiters, therefore, tend to look a lot like compressors with fewer controls; Protector is no exception, lacking Ratio and Attack settings.

However, what you don't often see on a limiter is a Knee control, which Protector does have. With the little orange knee arrows set to the top of the peak level meters, there's no audible change, but as you pull them down, the corresponding range is affected by the soft knee. Anything above the arrows is compressed on a gradient, from a gentle effect just above the knee to the full limiting at the 0dB point that you'd expect.

The knee thus has a much more controlled sound, and is likely to work best on individual tracks, rather than your final master bus.

As a mix effect, Protector has just as many creative uses as it does purely practical ones. The Knee setting can also significantly shape sounds, and the Release control has great potential for dramatically altering the effect, offering anything from brickwall-style peak limiting to violent waveshaping when used with very fast times.

It's even easier to get creative with Protector by driving the Pre fader, which goes up to 20dB. When pushing the parameters like this, you can kiss transparency goodbye, instead getting plenty of that all-important warmth. As long as colourful distortion is suited to the sound being manipulated, you can't go far wrong when using Protector in this manner.

Most limiters work on stereo channels by treating left and right equally - a sudden peak on either side will trigger a drop in amplitude for both sides, which is known as 'linked operation'.

Some mixing and mastering engineers opt for dual-compressor models, where left and right channels work independently of each other - this exaggerates the stereo field, which is sometimes desirable. The Stereo Link control facilitates both linked and unlinked operation, as well as any point in between.

Other controls include a knob to alter the final output level (Post) and a smooth Bypass switch, which removes clicking noises. Like other Blue Cat Audio plug-ins, Protector also has adjustable window transparency, a skinnable interface and Undo and Redo functions.

Additionally, the plug-in doesn't introduce latency, and requires an insignificant amount of processor power, so stacking multiple instances is no problem.

All of which means that it's a thumbs up from us.

Listen to these clips - the first is dry and the second has been driven with Protector: