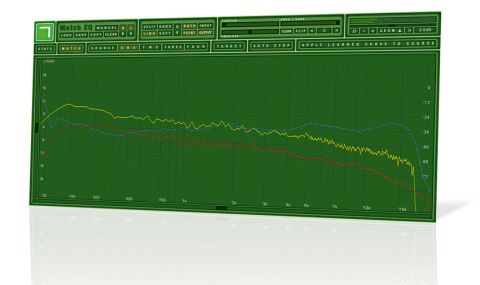 A great addition to the Axis roster, Match EQ does what it claims effectively, though it should be handled with care.

Expanding on their Master EQ, Axis Plugins' Match EQ is a precision EQ plugin (VST/AU/RTAS) that learns the frequency response of any source program material and applies that curve to another signal. In theory, then, it can take the sound of a hit record and make yours sound the same in terms of its frequency curve. In theory.

As with all Axis plugins, you don't buy Match EQ outright. Instead, Axis offer an annual subscription that licenses you to use their entire plugin catalogue. So you don't only get Match EQ and Master EQ - you also get Master Limiter, Track EQ, Track Limiter and Inspektor Analyzing Suite. All that for €39 a year. Licensing is handled by Steinberg's eLicenser dongle.

If you're familiar with Master EQ, you'll immediately feel at home here because Match EQ looks almost identical to it at first glance. But while Master EQ has only 31 bands, Match EQ offers 62 bands of fixed-frequency linear phase EQ, making it essentially a 'high resolution' graphic EQ. Each band delivers up to 27dB of cut/boost.

The big selling point of Match EQ is its Spektrum Matching feature, whereby it learns the frequency spectrum of a track that you like the sound of and applies it to a target track. Simply play the source with Match EQ inserted into its channel in Learn mode, then drag the plugin across to your target material's channel and learn its spectrum, too. Match EQ then generates a curve to make it sound the same.

This is the sort of process that's fraught with dangers and expectations, but the immediate results were pretty impressive in a mastering session for an upbeat indie song, applying a curve sourced from an Arctic Monkeys song. It definitely provided a good starting point from which to tweak, and it seemed to be more impressive on the top end than elsewhere.

Match EQ can store up to four source curves from different tracks or sections of the same track, enabling you to try a range of curves on your target. And if you want more, you can always save the state of the plugin and load another four.

Another important feature that leads on from Spektrum Matching is the State Manager, which keeps up to 100 user-programmed curve variations in memory so you can try subtle tweaks to the applied curve and scroll through them to audition. Alternatively, you can use a series of states for successive snapshot automation in your DAW, which makes applying complicated EQ transitions a lot easier than automating the gain of each band individually.

Tweaking the curve itself is done with the mouse, and the variable Q feature encompasses both musical and surgical options to whatever bandwidth you need. You can draw your curve in freehand, too, which opens up some interesting real-time filtering effects, as gain changes are so smooth and glitch-free.

Match EQ's headline feature may seem like a novelty and of limited practical use, but it does work well up to a point - as long as you use your ears to fine-tune the curve it produces. All in all, it's a powerful plugin that has a place both in mastering and tracking scenarios, although the processing latency may prevent the latter at times.