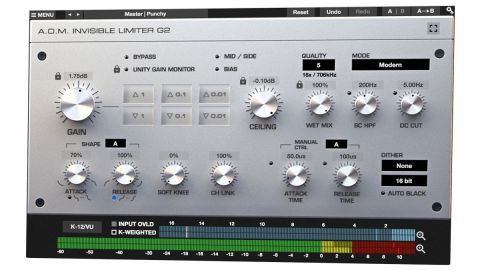 This transparent limiter is now even more flexible and versatile, with Expert Mode and some well considered new features. We'd love to see multiband processing, though.

Japanese developer A.O.M.'s Invisible Limiter caused quite a stir upon its release in 2011, impressing many mastering engineers with its transparency and ease of use.

Now the sequel is here, built on the same core brickwall limiting algorithm, but overhauling the GUI and adding plenty of new features.

The original Invisible Limiter was about as simple as plugins got, with just three knobs and a handful of mode menus and buttons to negotiate.

Upon launch, Invisible Limiter G2 (VST/AU/AAX) opens in the equally spartan Easy Mode, which may be all you ever need. A click of the square button at the top right, however, switches to Advanced Mode, revealing the full GUI and most of the new controls.

In Easy Mode, the control set is boiled down to the limiting essentials.

The old Input Gain and Limit Level knobs have been renamed Gain and Ceiling, setting the input and maximum output levels, while the new DC Cut dial sets the cutoff frequency (0.1-200Hz) of a pre-limiter high-pass filter, preventing limiting of sub bass and other low-frequency signals.

We like the handy incremental buttons by the Gain knob, enabling it to be nudged in 1dB, 0.1dB and 0.01dB steps.

Also present in Easy Mode are the Unity Gain Monitor button, for compensatory auto-levelling of the output as the input gain is adjusted, and the Oversampling menu, offering eight settings up to a whopping 128x, with the CPU overhead rising commensurately.

Four dither types are available (although Truncate mode is really just there for 'with/without dither' comparison), and the Auto-Black option deactivates dither when the signal drops to a low level.

Moved to the bottom of the GUI, the Reduction and Output Peak meters have been seriously upgraded from their previously simple strips.

You now get a choice of Meter Modes (Peak-RMS/VU, K-12, K-14 and K-20) with optional K-weighting; the Reduction meter shows the long-term maximum on the meter itself, rather than numerically; and the Output meter benefits from a far higher resolution than before.

Both meters can also be zoomed, although only to one fixed level. Invisible Limiter G2 retains all the transparency of its predecessor, doing an incredible job of squashing peaks without damaging the sound, even when pushed to relative extremes.

The integration of dither adds another layer of mastering functionality that certainly doesn't hurt, and the extra controls of Advanced Mode greatly boost its flexibility, making it even more viable as a bus or even channel limiter.

Our only complaints are that it's not multiband, and the Shape and Release Mode menus should become inaccessible when not in Modern Mode, since that's the only one under which they actually do anything.

Interestingly, rather than shell out the full price, you can instead buy a one-year license for Invisible Limiter G2 for $49, which may or may not strike you as a good thing.

We're not going to comment on that, but we will say that even at full price, this is an exceptional limiter that professional engineers will get more than their money's worth out of.