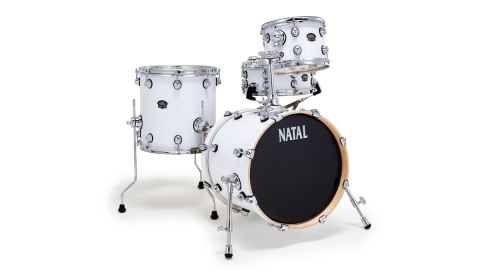 The Arcadia is Natal’s cheapest range, but has bags of style and maintains the distinctive Natal family image. This T6 mini-kit inevitably lacks some power, but it is great fun.

There’s a strong brand identity running through them all, and you have to look closely to believe the Arcadia is the budget level drum kit. Natal keeps matters simple by offering specific Arcadia shell packs with 24", 22" and 18" bass drums.

Now in line with current trends, Natal offers a compact version with 16"x14" kick, similar in proportions to Ludwig’s Questlove Breakbeats, Tama’s Silverstar Metro Jam, Pearl’s Midtown et al. And, by the way, those names tell you much about this style of kit.

The kit looks superb for such a modest outlay. So how do they do it? Well, first, it ships in a single cardboard box. Not unusual for a budget kit, but it does mean there’s some assembly work waiting at home for you, though nothing near as grim as erecting an IKEA shelf.

The only novel procedure is attaching the floor tom leg brackets and small tom mount (since the shells come tightly, Russian-Doll packed). This mounting hardware is gratifyingly bulky and would necessitate a rather larger box were it pre-installed.

There’s really nothing to it, anyway. Just grab a Phillips screwdriver and insert the two fixing bolt screws through the pre-drilled holes. The snare drum comes fully set up. Phew!

Shells are six-ply birch, around 7mm thick (8mm with the plastic wrap). Plies are butted together at an angle - like Yamaha shells - and are well finished. Inside, the swirling birch grain speaks of good-quality lumber. Edges are 45°, level and clean and sanded over so they are more rounded than sharp.

Bass drum hoops are also birch ply and they do betray a hint of budget frugality with their sharp edges. They’re not sanded round like expensive hoops and the plastic edge could actually slice your fingers.

The gleaming white wrap is heavy-duty and if it’s too plain there are three other cool finishes to ponder. All the metal fittings are decent quality. The sun logo lugs are lighter versions of the top-level Originals, but look similar. And unlike with many other budget kits, you get the full quota.

What you don’t get is the nylon-dipped Tru-Tune tension rods of the Café Racer and Originals, but the lugs have thick rubber gaskets as do the tom mounts, die-cast bass drum claws and spurs.

The 16" diameter bass drum appeared in recent times with Sonor’s Jungle and Yamaha’s Hip Gig kits. Prompted by the manic beats of drum’n’bass this remains a particularly compelling area for the T6 to explore. It is, however, coming from another direction: the miniaturising of the small jazz kit, which traditionally featured a 20" or 18" bass drum with 12" and 14" toms (like the Arcadia TJ).

The Arcadia T6 follows Ludwig, Tama and others in taking this direction further with a 16" bass drum and 10" and 13" toms. Whether 16" is a step too far depends on your sonic taste, but having the option is surely a good thing. It does necessitate a pedal lift (included, though not pictured here) so your beater strikes reasonably close to centre.

What’s important to realise is these extra-small sized drums will never produce the sort of depth and body of larger drums. That’s stating the obvious, maybe, but don’t be misled by slick YouTube videos. The reality is that however low you tune it, a 13" floor tom will never sound like a 16", not even a 14". And a 16" bass drum will always honk!

Tuning this 13"x13" floor tom as low as the head allows it soon starts to growl. But at its lowest workable tension you get terrific punch. It retains a middle pitch, never a really low note. You can’t force the 10"x7" to do the physically impossible either. But with mid to high tuning it really pops and pings.

The bass drum is just about big enough so you can slacken it down and get a wet thwack. Impact is not a problem - and with a mic/EQ you can emphasise the lower frequencies. The 13"x5" snare is the icing, with its deep-cut snare beds controlling the sharp, clean response and (this time) flexible tuning range.

Generally, the kit sounds good once you accept its obvious limitations. Experimenting with different heads and careful tuning rewards with subtle timbral variations for electro-drum’n’bass/hip-hop etc. Tuned mid/ high it works quite well for jazz and funk where the toppier, snappier tones are more at home than in out-and-out rock. With the Christmas market for starter kits, this is also a perfect pre-teenager bedroom kit.