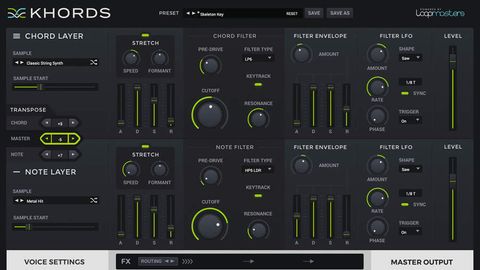 For lovers of old-school dance music and the production techniques that defined it, Khords is utterly unmissable.

The follow-up to last year’s Bass Master, Loopmasters’ Khords (VST/AU) is a virtual instrument built to deliver complex chordal and harmonic tones with a retro flavour.

It’s immediately obvious that the two plugins come from the same stable. They share a common UI style (albeit with rather more going on in Khords than Bass Master), are both monophonic, and both generate their sounds through the combination of two sample layers. In Khords’ case, these are nominally titled Note and Chord, and both draw on a library of 315 sampled single-notes, chords and short phrases.

The idea is to mix, match and tweak layers to create fixed chords for linear ‘transposition’ (ie, audio pitchshifting) up and down the keyboard, emulating the chord sampling technique so popular in 90s dance music production. It’s a novel concept that we’ve not come across in any plugin before, and while Khords could easily be misapprehended as a simple ROMpler with an unremarkable engine, it’s actually all about the carefully curated samples, and the evocative harmonic structures and progressions that can be found via its intuitive, engaging interface.

How strange the change...

The horizontally-arranged Chord and Note Layer sections are identical in their controls. Opening the Sample menu reveals three top- level categories - ‘Major Feel’, ‘Minor Feel’ and ‘Route or Open’ - each containing numerous instrumental sub-menus: Guitar, Keyboard, Percussive, Synth, Vocal, etc. The Major and Minor Feel categories are, unsurprisingly, made up of minor and major chords, phrases, arpeggios, strums and sequences, while the Route or Open samples are single notes, open chords and short sequences that don’t include any 3rd intervals and thus will layer happily over any chord.

There’s a mix of loops and one-shots in there, and with both layers sharing the same library, the Chord and Note nomenclature is only really suggestive, implying that layering a Major or Minor Feel chord with a Root or Open note is the intended operation. Whatever combo you go for, though (and if you can’t decide, the Randomise buttons pick samples from the selected tonal categories for you), you can offset the two layers by applying up to +/-24 semitones of transposition to either or both.

Khords’ effectiveness and success are in large part down to its fabulous 300MB sample library, which consists of 315 chords, notes, sequences, arps and strums culled from the vast Loopmasters’ catalogue.

There’s a ‘crate-dug’ feel to much of it, particularly the smooth and jazzy electric piano licks and guitars. For us, the highlights are the keys in general, the pads and the percussives, but classic ‘workstation’-style sounds are well represented, too, as befits the 90s angle. A handful of vocal and brass noises open up interesting layering possibilities, and the strings take in sustains, pizzicato and arpeggios.

It’s clear that a great deal of thought has gone into the selection of every sound in terms of its compatibility with the overarching chord sampling paradigm and palpably vintage vibe. And the integration of the Root or Open category is a stroke of genius, making it easy to float an extra timbral layer on any chord without affecting its harmonic tonality.

Crucially, the sample library has been masterfully exploited in the creation of Khords’ 550-strong preset library. Jaw-droppingly expansive in their creativity and sonic range, the patches within amaze and inspire at every turn. Selekta!

The Sample Start slider shifts the playback start point to wherever you like within the sample, from 0-100%. It’s particularly useful for customising the phrase samples by cutting into them at rhythmically or harmonically meaningful points, but it also works well for picking up sustained sounds at timbrally interesting moments.

The Stretch section enables each layer to be timestretched from 1-200%, and darkened or brightened with the Formant knob. Below that sits an ADSR amp envelope. Each layer also incorporates a multimode resonant filter with dedicated envelope and LFO. A solid array of low-, high- and band-pass filter types are onboard, from 6-24dB/octave, and the Pre-Drive control dials in sometimes-alarmingly crunchy distortion.

At the bottom of the interface, the reorderable Reverb, Delay and Chorus effects each offer a selection of algorithms with minimal controls, and sound great; while the OTT-style Frequency Booster three-band compressor can be applied in parallel to beef things up considerably.

Over in the Voice Settings section, any four of Khords’ controls are assignable to the mod wheel for manual modulation - this, it’s worth noting, is the only assignable mod source on offer. Here also, the adjustable (up to 10 seconds) Glide function is just the thing for those Metalheadz-esque bends and swoops.

You might assume that the apparent inflexibility of Khords’ pre-rendered chord samples - ie, you can’t change the actual notes within them or have them automatically timestretch to maintain consistent duration up and down the keyboard - limits its compositional creativity. This completely misses the point. This is an instrument that wants to take you back to a golden era of dance music, when chord sampling was a ubiquitous technique, yielding a particular kind of sound and playing a major role in shaping the sounds of jungle, DnB, house and other genres.

The samples themselves slot into the technical framework beautifully - see Champion sounds - and playing around with the Sample Start and layer Transposition parameters never gets boring, giving rise to all sorts of weird harmonies, dissonances and juxtapositions that you’d never end up at if you tried to compose them yourself. Honestly, the lack of individual note manipulation within the chords feels like a feature, not a failing.

Having said all that, we’d very much like to be able to import our own samples, and the paucity of modulation options is a minor setback. The amp and filter envelopes and filter LFOs are fine, and we like the easy mod wheel assignment setup, but at least one extra LFO and envelope for modulation of Sample Start, Speed, Formant, Pre-Drive, etc, would be beneficial. It’s not a deal- breaker, however, and the workflow is possibly quicker and more focused because of it.

If you’re making dance music of any kind - or just want to bring the timeless and atmospheric sounds of jungle, DnB, house, garage or hardcore to your productions - Khords provides a rich wellspring of inspiration. Go get it.