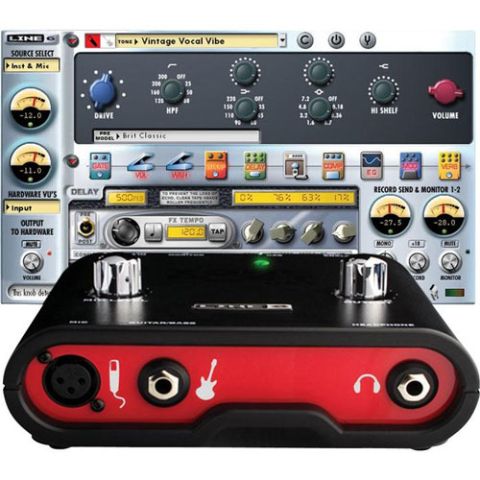 An excellent all-in-one solution for guitarists and singer/songwriters.

Line 6´s products are familiar to guitarists the world over. The company have spent years developing and refining their Pod range of outboard gear, and their GuitarPort system -- which features a USB interface and a set of software amplifiers and effects -- has proven to be a big success with computer musicians.

The UX1 takes its lead from the GuitarPort and offers guitar amp, bass amp and mic preamp emulations in software, and also features an audio interface that provides all the necessary connectivity.

The hardware looks rugged and strong but is actually made entirely of plastic. Along the front are the mic, instrument and headphone sockets - to the rear are the stereo line inputs, the stereo monitor input, the stereo analogue outputs and the USB port.

The two silvery controls on the top are for adjusting the mic gain and hardware output level. The setup process doesn´t throw up any surprises -- it´s just a case of installing the drivers and plugging in the hardware. You can then use the Line 6 ‘monkey´ utility to configure the hardware and search online for updates. The process is very quick and painless, so you´re ready to go within a couple of minutes.

The software element of the UX1 is called GearBox, and its GUI will be familiar to anyone who´s used a Line 6 product before. Trademark design clarity and cute graphics make for an intuitive interface that, although ridiculously easy to use, enables you to create complex tones.

What the UI displays depends on which input is active. The Source Select menu enables you to choose from microphone, instrument and various line input configurations. If you have two inputs running in parallel -- such as when you click the ‘mic and instrument´ option -- you can switch the interface between them using buttons at the top of the screen.

Reassuringly, the guitar and bass amps/effects are lifted straight from the excellent PODxt and Bass PODxt. The 16 guitar amp and 24 cab models are very similar to those you´ll find in the GuitarPort, so all the big names are here. You´ll find Marshall, Fender, Mesa Boogie, Soldano, Matchless Chieftain and Gibson models, and the speaker configurations vary from tiny 1x6" examples to whopping 4x12" stacks.

Listening to the shimmering Fender Deluxe clean sounds is like drinking cream through your ears, and the bluesy crunch, warm saturation and heavy metal distortion tones (plus all those in between) are also very impressive.

There are far fewer bass amps and cabs -- five of each, in fact -- but their high quality makes up for their low numbers. The amp line-up features Ampeg SVT, Ampeg B-15 Portaflex, Eden WT-300, Fender Dual Showman and Gallien-Krueger 800RB models, while the cabinets range from 1x15" to 8x10" structures! Again, these bass-orientated emulations are very authentic. There´s plenty of depth and fullness to the sounds; in fact, there´s probably a little too much on some of the presets, so they´d need to be tamed if you wanted to use them in the context of a mix.

The good news is that the amp models can be tweaked using the same controls as you´d find on the original hardware. One of the most exciting elements of the UX1 is its suite of mic preamp models -- six of them in total. The emulations include the API Lunchbox 500 6-B, Neve 1073 and Avalon VT-737 preamp/EQs, and there are also Vintage, Console and Low-Fi examples.

The preamps operate in the same way as the guitar and bass amp models. You make your selection from a drop-down menu, and the interface changes to display the preamp´s controls. These are used to shape the sound to your liking.

The preamp models all sound distinctly different -- they add flavour to the mic signal and can really help to polish it up a little. A large selection of presets is provided. These cover each of the three emulation types and are categorised by instrument. Alongside the preset menu you´ll find a bypass button that completely bypasses the UX1 audio engine, and a compare button that enables you to switch between the saved preset settings and your own edits.

You also have access to the tuner, which is accurate and easy to use. Last, but by no means least, are the 24 effects. These are modelled on classic stomp boxes and premium studio gear, and all the usual suspects are here.

With the TonePort UX1, Line 6 have succeeded in taking the all-in-one guitarists´ recording package to a new level -- you even get a Lite version of Ableton Live in the box. The package is perfect for singer/songwriters who want quality amp and preamp emulations, hardware that performs well, and software that´s extremely easy to use.

The only real drawback is the lack of phantom power, but if this is important to you, check out the UX2, which comes with a more fully-featured audio interface. At just over £100, though, there´s no denying that the UX1 is a real bargain.