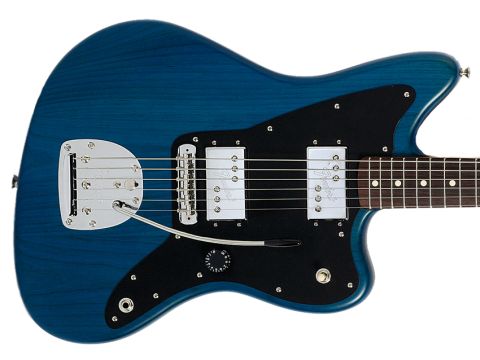 If you love the offset look but need more grunt, audition this.

Thurston Moore and Lee Ranaldo began their mutual love affair with the Fender Jazzmaster more than two decades ago. Since the early eighties, Sonic Youth have used an assortment of cheap and cheerful instruments to accommodate their myriad alternative tunings, among them a couple of then deeply unfashionable Fender Jaguars.

When the band's first Jazzmaster arrived, its longer scale length proved to be better at handling the string tension of those unusual tunings central to the Sonic Youth sound. Their first shows with Dinosaur Jr also helped persuade Moore and Ranaldo of the potential of a guitar that even then, in the hands of J Mascis and Tom Verlaine and Elvis Costello, was an instrument for a very different kind of guitar hero.

We're pretty sure that there are some readers who scoff at the very idea of Sonic Youth signature Fenders, particularly with retail prices in excess of £1,800. However, Fender has a history of recognising contributions to the evolution of the instrument from players outside of the traditionally revered blues canon.

Indeed, even the curmudgeonliest Sonic Youth detractors must admit grudging admiration for their insistence on making music strictly on their own terms for nigh-on three decades.

The biggest irony is that in practice, both Moore and Ranaldo's Jazzmasters incorporate streamlined designs that make the model much more accessible to more conventional guitarists. Gone from both guitars are the complicated rhythm circuit and that troublesome roller bridge, which would all-too-often see strings pop out when subjected to any kind of right hand aggression.

In addition, the single volume and three-way toggle switch arrangement dispenses with any wiring complexity and contributes to a pair of guitars that have all the offset aesthetic charm of the original Jazzmaster design, but none of the quirks that can make the instrument a fear-filled live proposition.

These are real player's guitars, honed by decades of gigging.

A simple design tweak, such as making sure the toggle switches operate from side-to-side rather than up/down not only proves more logical in use but makes it far less likely that you'll accidentally flip the pickup selector to the wrong position in the heat of battle. However, if you prefer to use the more traditional up/down operation, it's easy enough to remove the scratchplate and change the orientation.

Moore's Jazzmaster takes inspiration from a guitar built by his tech from various parts, that he's used live since 2007, while Ranaldo's 'Jazzblaster' echoes not only his genuine Fenders - modded with Seth Lover-designed Wide Range humbuckers - but also a pair of guitars built for him by luthier Saul Koll.

While the original Koll models were thinlines, Ranaldo and Moore's signature Jazzmasters both feature solid alder bodies, finished in a thin satin nitro-cellulose.

While neither the blue nor green hue here would be our first choice finish for a Jazzmaster - tastes here lean towards Fender's more classic sunbursts and car paint shades - the thin paint job and relatively light bodyweight in both cases makes for a resonant, open response when strummed acoustically that's much livelier, with more sustain, than many Jazzmasters we've played - including vintage examples.

Both guitars feature cool black anodised aluminium pickguards; the Moore model's Jaguar-style split control assembly is a result of his tendency to break Jazzmaster pickguards when thrashing around onstage - his guitar tech has learnt the hard way that it's easier to replace a smaller section than it is a whole plate.

An acoustic workout reveals just how much difference fret gauge can make to the way a guitar feels. Both satin-finished necks have an identical vintage-style 7.25-inch fretboard radius, but it's the green Thurston Moore model with its jumbo fretwire that feels much more welcoming to our fretting hand.

The blue Ranaldo Jazzmaster's vintage frets make for less comfortable bends in our opinion, particularly in higher registers, but it's simply a matter of personal taste. The Ranaldo model's Mustang bridge - the addition of which is a very common Jazzmaster and Jaguar mod - provides roomier string spacing than the Gibson-style adjust-o-matic bridge on the Moore model.

Combined with the contrasting fret gauges this gives the impression that - while both guitars are very close in feel - the Moore model is marginally better suited to aggressive lead styles, with the Ranaldo model leaning towards chiming arpeggios and chordal parts. If we had to express a preference on looks alone, we'd take the body and neck from the Moore model, and Ranaldo's choice of pickups and bridge.

Case candy includes the usual vintage-style thin leather strap, strings and lead. Alongside this is a real treat for fans in the shape of a sticker sheet and exclusive magazine.

The sticker sheet allows for instant DIY customisation with designs by the artists themselves and inspired by those affixed to their instruments over the years, while the magazine contains interviews with the band's guitar techs about the instruments themselves, a discussion on string gauges and information about tunings used on many Sonic Youth songs, in the shape of reproductions of the techs' own annotated setlists: a great addition.

When the physical elements of two guitars are so similar it provides a useful platform for examining the differences between the pickups installed. Indeed, these aren't ordinary Jazzmaster pickups or Wide Range humbuckers.

The Seymour Duncan Antiquity II units in the Moore Jazzmaster are resplendent with bags of twang and attitude, but there's a more cultured edge to proceedings here than, for example, the hotter, brasher units installed in the Classic Player Jazzmaster. Given the price difference, you'd expect this to be the case, but all the same this is a great sounding instrument by any standards.

It's obviously never going to be a go-to guitar for AC/DC or Metallica covers, but through a 'Blackface' Fender with spring reverb, wobble that waggle stick and we're in surf and Spaghetti Western heaven. Back off the 'verb and stomp on a fuzzbox and it's the sound of those old Sub Pop seven-inches you own, which have been gathering dust since the dawn of the iPod.

As we mentioned previously, those great big frets and the stable bridge assembly do facilitate more conventional blues-rock playing styles, and with the neck pickup in combination with a loud clean tone, you get very nice sound for those Axis: Bold As Love-style rhythm embellishments.

Switching to the Ranaldo model, anyone who hasn't played a guitar with Wide Range 'buckers in before should be mindful of the fact that while these units were designed by Seth Lover, they are very different animals to PAF-style pickups. Also, Ranaldo's hot-rodded Jazzmaster sound is very different from that achieved by the popular Cobain-style mod of dropping a Seymour Duncan JB into Fender's offset body guitars.

That said, Ranaldo's re-voiced Wide Range units do give the guitar a great deal more midrange push than the Thurston Moore model, but this is a more open, airy, dynamic humbucker sound, with more chime and top-end than the uninitiated might expect.

We think the green Thurston Moore guitar might just be the perfect player's Jazzmaster. Retaining the, ahem, sonic identity of the model, it streamlines the design by removing or replacing the parts that can prove a liability for all but the most polite guitarists. A few mainstream finish options and we think this is a winner.

Those big nickel-covered humbuckers look and sound great in the Ranaldo model, but by definition they remove much of what makes it sound like a Jazzmaster, or indeed a Fender. If you like the offset look but want more mid-range muscle, this is of course a good thing, but we can't help feeling that Ranaldo's guitar will be more niche in terms of its appeal than Moore's.