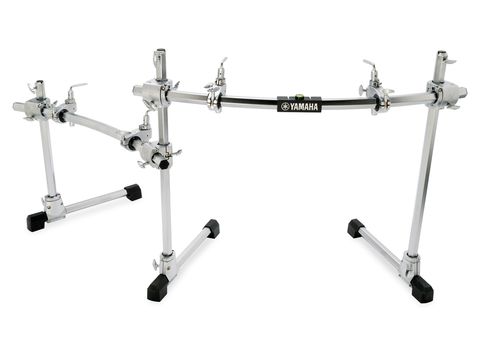 Many other rack systems, including Yamaha's previous Super Rack, utilise round section tubing, while Pearl's use square. Square and hexagonal surely have it over circular in terms of stability. Either way, the Hexrack is beautifully engineered and devilishly handsome.

Yamaha's much-praised System Hardware with tom holders - based on the hexagonal steel rod and hard resin ball design - is quick, simple and steady.

So the company's adaptation of this concept to its spanking new rack system should prove a winner. There are two basic configurations, the HXR2L and HXR3L, for five or six piece kits.

The Hexrack's sumptuous matte steel finish is created by a blasting process, which reduces susceptibility to scratching, not to mention messy fingerprints and glare from stage lights.

Holding it up are three different types of hinged clamp - all sleekly designed steel castings - for securing the legs, the rails and for mounting your toms. There are three lengths of curved horizontal rail (24", 36" and 44") plus two straight lengths (23" and 33") for legs, although these can also be adapted as rails if needs be.

As with Yamaha's System Hardware, toms are held by a synthetic ball clamp that allows wide rotation and positioning. This new design though has a larger synthetic ball that is split so that it wraps around the hexagonal rail. The 'L' tom arm itself, attached to its clamp, is then tightened around the ball at the angle you wish.

A spirit level 'bubble meter' clips onto the main rail to check for horizontal.

The review rack is the larger HXR3L with two curved rails (44" and 36") rather than one. In essence you have three leg assemblies supporting two horizontal rails. The rails each have two tom mounting brackets, so by positioning one rail higher than the other you can have two small toms up high and two floor toms lower and to the side.

You can slot cymbal mounts (not provided) into the top of each leg assembly. Hence the whole structure accommodates a six-piece, four tom kit with three cymbals. For extra items like percussion or double kick set-ups Yamaha offers further brackets to buy as add-ons.

All brackets are massive castings, designed with the heaviest of pro touring drummers in mind.

The rack comes in a large flat cardboard box together with instruction sheet. It's a bit IKEA - the diagrams are accurate, but you'll need to work out what all the numbers refer to. First assembly is not totally intuitive, but once you get the hang of it, it should take no longer to erect than normal stands and it's far more stable, particularly than stands used for mounting floor toms and boom cymbals.

Although the hexagonal tubing and cast assembly blocks look super-chunky, the whole thing is surprisingly lightweight because the tubing is hollow. It's also claimed that the hexagonal cross section reduces resonance associated with round tubing. Certainly if you tap the tubing you get a click not a clank.