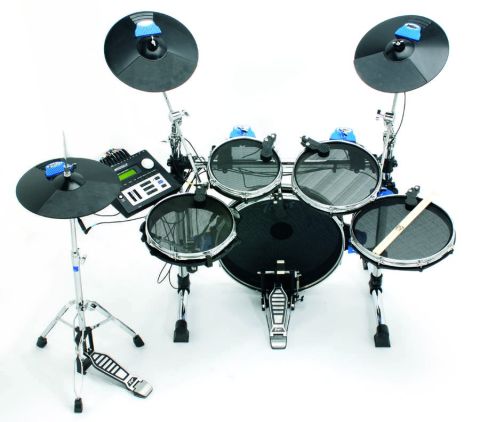 The 450 Module (while perhaps still not the last word in refinement) is a truly welcome step up and makes the kit vastly more attractive. Audition it with realistic expectations and you'll find little to pick fault with at the still-cheaper-than-anything-else price point.

The march of progress very often divides opinion. For every flag-waving digital evangelist there's a vinyl junkie somewhere bemoaning the demise of the 12" single. But there are some things that no one can find fault with. Sometimes improvements are made to products, like this electronic drum set, that merit a thumbs-up from us all. Enter the newly upgraded Traps E400...

A quick glance at the gallery and you might think that nothing's changed, and, in most respects, this E400 is exactly the same as the previous E400 model. The rack, mesh-head drum and plastic cymbal pads go more-or-less unchanged (aside from a small but significant improvement that we'll come to), but perhaps the most important part, the bit that'll do most to commend or damn the E400, is the brain, and here we have a marked upping of the ante over the previous incumbent.

The sound source for the original E400 was, shall we say, limited in terms of its scope and sonic nature. The kit has always been affordable, but even judged against its reasonable price tag the first incarnation sounded underwhelming. It was rather noisy, tonally dated and looked distinctly early '80s - in all, not really a winner. But Traps took the criticism of the first unit on the chin and has come up with a rather better offering for the E400 v2.

Somewhat confusingly bearing the legend '450 Module' on its face, the new larger brain immediately cuts more of a dash than the original. This one has an LCD screen and decent-sized data wheel, surely the minimum expected of any such unit worth its salt these days. And it just looks and feels better.

There are no tiddly blue buttons to deal with, instead bigger, rubberised types take care of selecting parameters, editing, etc. Oh yes, there's some of that available too. Where the first E400 was limited to 'variations' on each basic sound, the 450 Module allows for more in-depth tweak-ery.

There's not the scope available from pro rigs like Roland's 10-times-more-expensive TD-20. So don't expect to get the sound of a 13"x4" maple/ walnut snare recorded with a Shure SM58 in Abbey Road Studio Two over a 15"x7" titanium drum fitted with 42-strand wires miked up with Rick Rubin's favourite Neumann. If you want that control, sell your soul and stump up for a pro-level kit.

Given that the E400 is unlikely to be pressed into too demanding service, the level of control over reverb time, EQ, pad assignment and so on is perfectly adequate. This kit is for getting you started down the digital road, or for rehearsing when you can't use your acoustic kit.

With 30 kits and 50 backing songs present in the 450 Module there's sufficient to cover a fair number of bases. The play along tracks are perhaps one of the weakest aspects of the unit in that they're resolutely stuck in the mid-'80s in terms of sounds.

But we can' be too harsh here. After all, most players will see these as fun diversions rather than make-or-break features. And the Aux In socket on the rear means you can always plug in your own sound source and therefore your own choice of Rock-A-Long tunes.

The advances made with the addition of the new brain aren't such that it provides an accurate emulation of the complex response of an acoustic kit, rather that it gets you in the ballpark, as it were. And where the first one would probably have driven you mad after prolonged playing, we can happily state, you'd be much more inclined to use the 450 sound box for more than just dabbling.

Rolls are still machine gun-like, but there's a sufficient degree of difference between the quietest and loudest triggered sound for the unit to feel reasonably responsive. And it's surprising what a psychological difference playing mesh heads rather than rubber pads makes to the aural perception of the E400. Were this brain hooked up to unyielding ping pong-bat type pads, the general tonal impression of the kit would be rather different.

As it is, the forgiving feeling of the mesh heads adds more than the sum of its parts to proceedings. Which makes the E400 pleasingly playable. Another real help in this regard is the fact that the size of the pads mimic a traditional acoustic kit, rather than pads of the same size for each 'drum', Traps have, from the outset, offered playing surfaces that provide a very familiar playing experience.

The nuts-and-bolts of the Traps rack consist of a pretty decent collection of tubes and connectors. An unusual feature is the manner in which the two upright sections have spurs onto which the bass drum is secured, which makes for a compact rig. It restricts the flexibility of the set-up by its very nature, but for a kit of this type it's a perfectly workable solution.

The pads themselves boast proper hoops/rims and are designed so they can be used with regular drum heads as a cut-down acoustic kit if necessary. The fact that the kit's pad triggers are attached to posts on each pad rather than built-in means it's an easy process to pop these off and install your favourite regular heads. Flexible, or what?