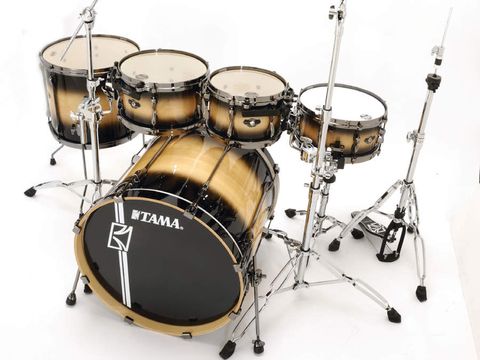 Tama has its finger on the pulse with this one. It's relatively cheap because it's birch/ basswood and made in China. But don't let that put you off. It's a cracking kit with great features. Shallow toms are not new but you can expect every other manufacturer to follow suit.

Tama's Superstar, ﬁrst seen in 2005, sits in the middle of Tama's three main ranges - above the Imperialstar and below the Starclassic. There are, however, six Superstar variations, depending on ﬁnish and sizes. Three of these are the new Hyperdrives with shallow toms, the most expensive being the Custom Hyperdrive Superstar, with its lacquered fade ﬁnish.

Superstar shells are a mix of birch and basswood. Birch forms the heart, with basswood used for the inner ply and outer lacquered veneer. Toms and snares are six-ply, 6mm while bass drums are seven-ply, 7mm. The basswood grain is not exactly memorable, but the outer gloss lacquer is faultless. A paper tag inside each shell proudly proclaims they are 'Handcrafted in China'.

Bearing edges are almost sharp enough to cut your ﬁnger, indicating a good, hard quality of wood. Edges have 45-degree cuts, peaking two thirds of the way into the shell - excellent edges for budget drums.

All shell hardware, including tension bolts, is ﬁnished in sexy black nickel. Unusually for today, the 'Sound Bridge' lugs are full length and bridged so that, like tube lugs, they only contact the shell at each end. This reduces stress, allowing for high tension while not constricting the shell.

The 22" kick has eight lugs rather than the 10 you'd expect on a professional drum. We doubt it makes much difference except to the fussiest of tuners, but it does remind you that the Superstar is a budget range. Metal rims are the same die-cast hoops featured on the pro Starclassic series. The insides of the hoops are left half polished and surprisingly unsmooth, presumably another indication of cost-cutting.

"Drummers play so hard now and they're often mic'ed, so you simply don't need the full-fat boom of traditional toms. Toppy, shallow toms are one solution".

Rack toms come complete with black Star-Cast isolation mounting brackets. These attach to special ears on the drum hoop and not to the tension rods as with some systems. This keeps tuning and mounting operations apart, which must be a good thing.

The Hyperdrive comes with an excellent, full Road-Pro hardware package. Top toms are mounted from cymbal stands via multi-clamps so the bass drum remains un-drilled. The shallow tom depths make positioning easier if you like low-slung toms.

As you'd expect, the overriding sonic feature is punchiness. The combination of birch - the 'focused' timber - shallow sizes and die-cast hoops makes the small toms extremely tight, fast and attacking. In fact, playing rim shots off the die-cast tom hoops is almost timbaleesque.

There's no loss of power, but there is inevitably less bottom - this is a smart direction. Drummers play so hard now and they're often mic'ed, so you simply don't need the full-fat boom of traditional toms. How many drummers have been to concerts where the hi-hat and snare cut through, the bass drum is clicked to the max, then the drummer goes round the toms and... nothing - the drums disappear? Toppy, shallow toms are one solution.

The drums are ﬁtted with Tama Powercraft 250 batter heads. These are made by Evans, and the batters at least are proper Mylar, equivalent to Evans twin-ply G2s. The bottoms are single ply. With some playing in, the heads sounded ﬁne - obviously, you can change to pro heads later. The shallow shells are easier to tune than normal sizes. There are fewer overtones to complicate matters and you can quickly go low or high with equally workable results.

By contrast, the bass and snare are both relatively deep. The snare is 13"x6", and the loss of an inch in diameter means a snappier attack, while the 6" depth results in some boxiness. With the die-cast rims there's a ﬁnality about the rim shots - an abrupt 'clat' and short sustain. Not bad, but we weren´t knocked out.

The bass drum's uncut black logo head looks good, but with a drum this size many buyers will cut a porthole. We swapped for a front head with standard 5" offset hole and it made a big difference, giving the edge to counteract the massive rumble generated by such a large internal volume. We felt happiest with a deep/loose batter, when the tone was thunderous but controlled.